In the history of Indian Subcontinent, 15th and 16th centuries were two remarkable centuries. It was the era when the fusion of Indian and Persian/Central Asian cultures and art reached its climax. The region of Deccan bore maximum fruits of these cultural syntheses. The rulers of Bahamani dynasty which laid the foundation of this trend saw new heights under the Qutb Shahis of Golkonda.

Tajaddin Firuz (1392 – 1422 CE) was a celebrated Bahamani ruler in Gulbarga. During his rule, there was an influx of Persians, Arabs and Turks into the Deccan. The trend continued throughout the Bahamani rule.

One among these immigrants in the later Bahamani Court was Quli Mulk, a Turk man, who rose to prominence as a governor of the royal court. In 1487 CE, he was sent to Golkonda to quell rebellious leaders. This was a turning point in the history of Deccan in the form of the birth of the Qutb Shahi Dynasty. Golkonda Fort was strengthened and expanded then on. In the succeeding century, Golkonda became a major centre of miniature art, Urdu poetry and literature and majestic architecture. The prosperity of Golkonda reached manifold under the patronage of Muhammad Quli (1580-1611), under whom the new city of Hyderabad was established. 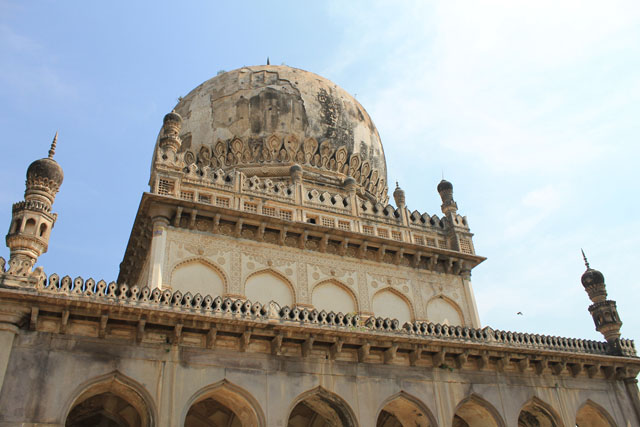 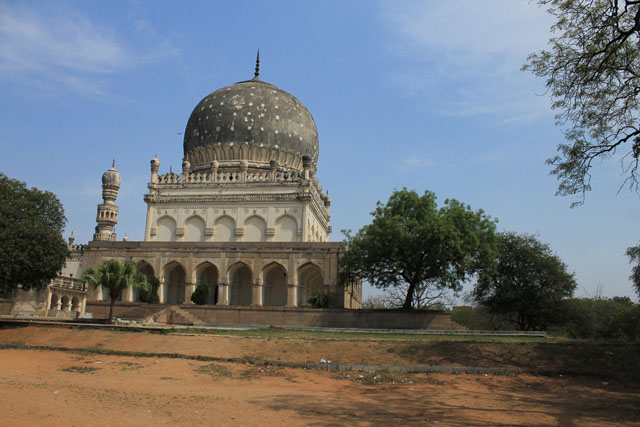 The Majesty of Qutb Shahi Tombs in Golconda

Golkonda, the first capital of Qutb Shahi can still be appreciated even though many of its buildings are now in ruins. The impact of Iranian urban tradition is witnessed in the axial alignments of royal ceremonial gates, markets, ceremonial portals and audience halls. These elements are distributed within a double series of concentric walls that ring a great rock, the Bala Hisar, rising 140 m from the surrounding plains.

Hyderabad is a bustling metropolis located in the heart of South-Central India. The city is also the capital of Telangana State and is a major tourist place for its monuments, food culture, museums, architectural jewels, palaces, and vibrant malls, IT corridors, hotels, parks and many more. For an appreciation of Qutb Shahi monuments keep at least 2 days. Your day one should be spent in Golkonda Fort and Qutb Shahi monuments and day 2 at Hyderabad Old City which has also a vibrant street shopping corridor. There are plenty of options for stay and food for all budget. The city is well-connected nationally and internationally by air, rail and road. 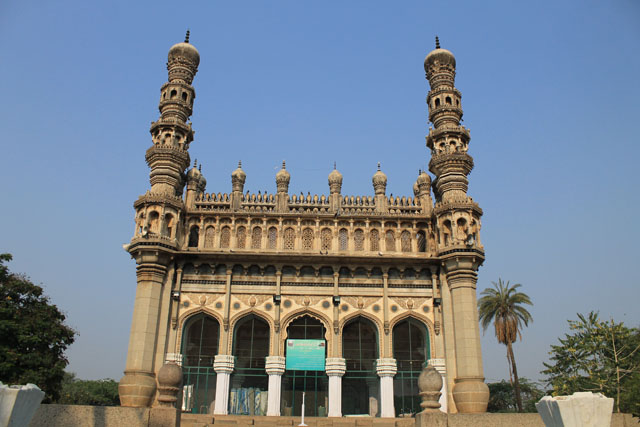 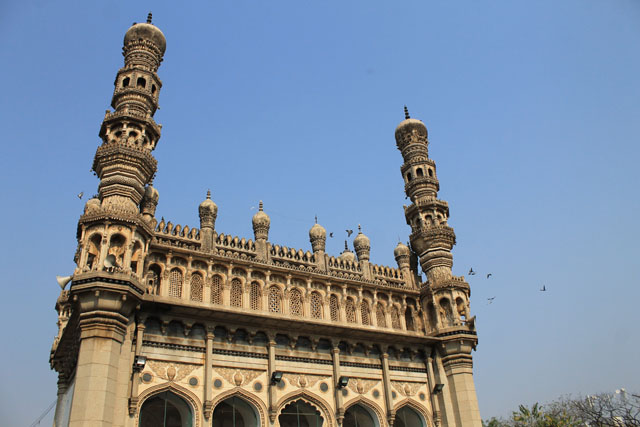 Hyderabad, the shifted capital on the banks of Musi was also built in the Persian model with Char Minar at its core of planning. Char Minar, the largest and most original architectural conceptualization of the Qutb Shahis continues to dominate the city. The nearby Mecca Masjid built towards the end of Qutb Shahi rule in the 17th century is city’s largest mosque. 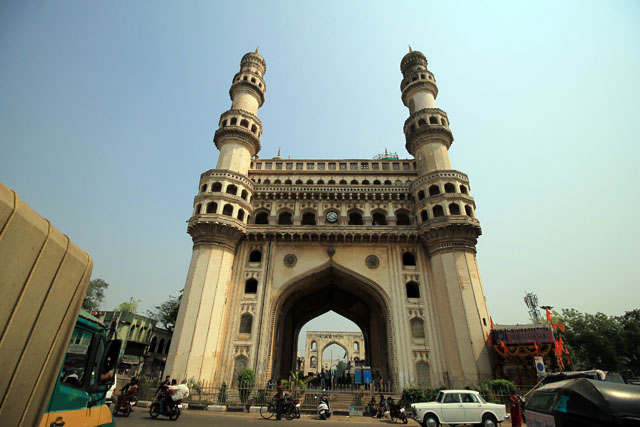 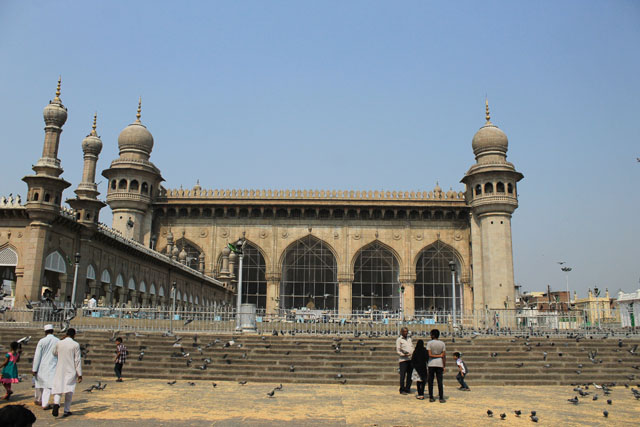 Charminar and Mecca Masjid in Hyderabad

Qutb Shahi rulers had built their tombs closer to the former capital Golkonda in a sprawling area. Rising to tower heights, the Qutb Shahi tombs have massive domes of slightly bulbous form. Finials cluster around the petalled neck of the dome, a feature that makes distinctive the Decani tombs among Indo-Islamic monuments of India. The other characteristic features are superimposed arched recesses and projecting balconies with ornate balustrades. 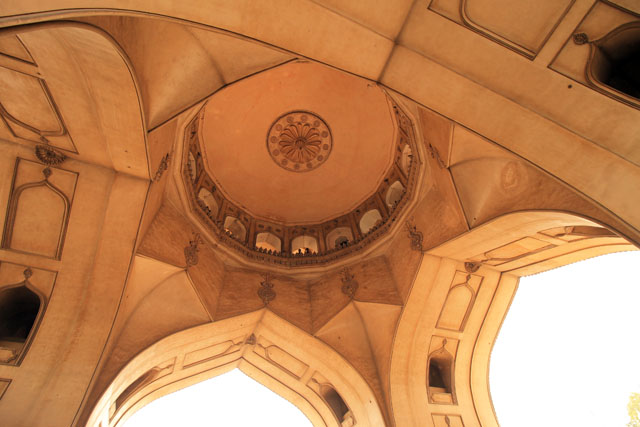 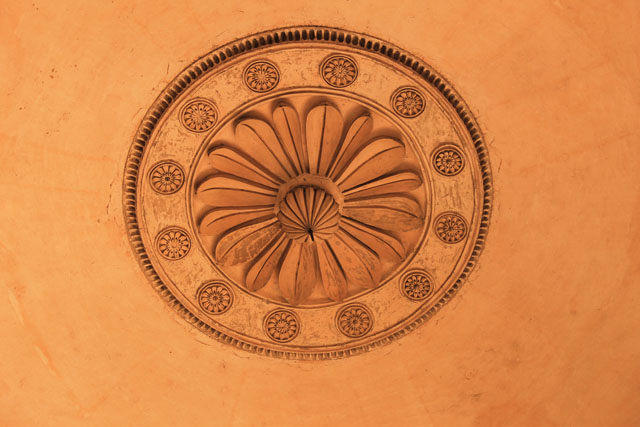 The Interiors of Charminar in Hyderabad 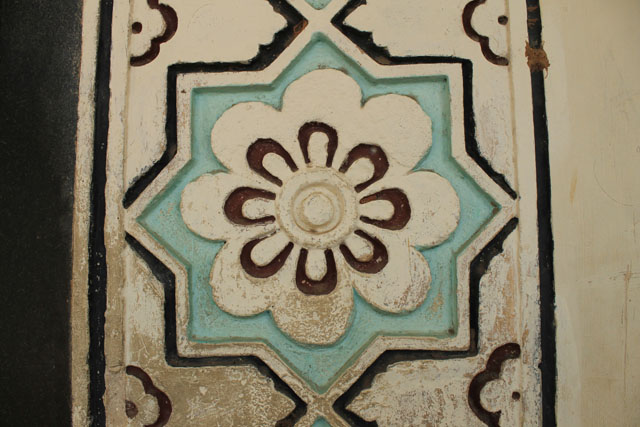 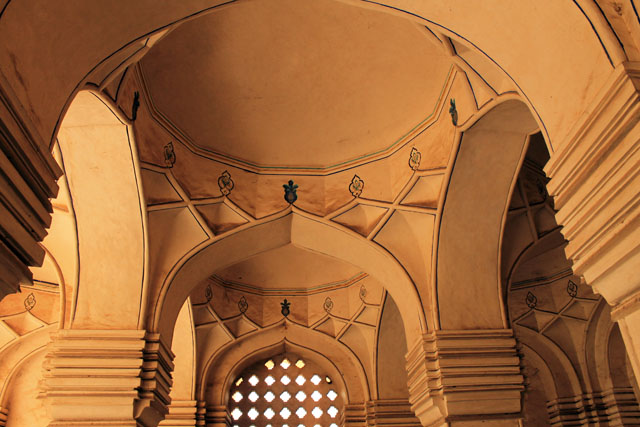 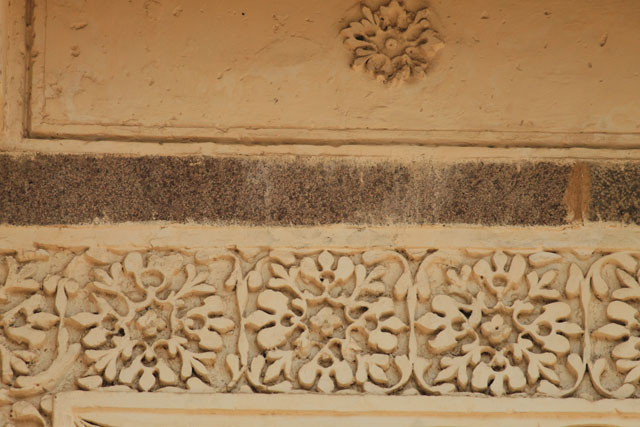 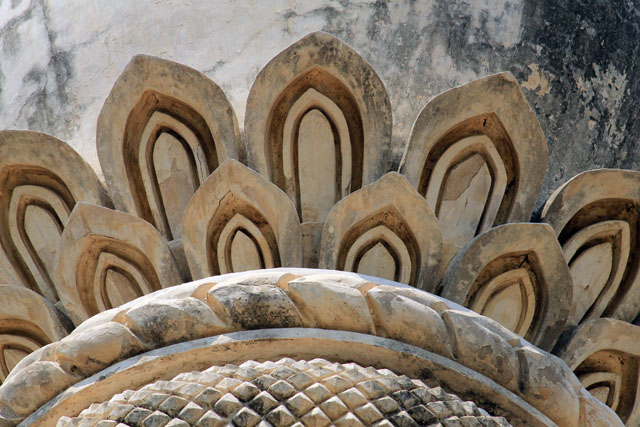 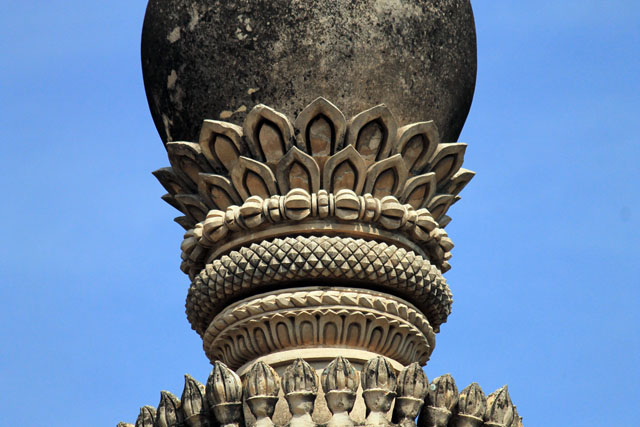 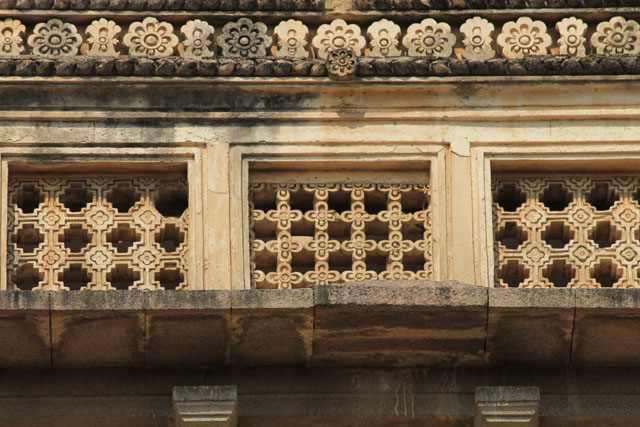 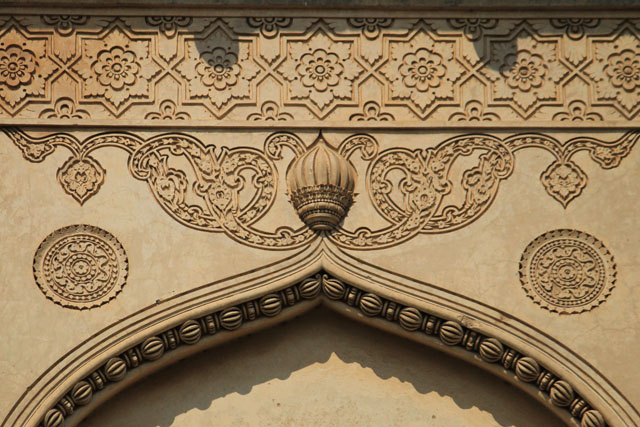 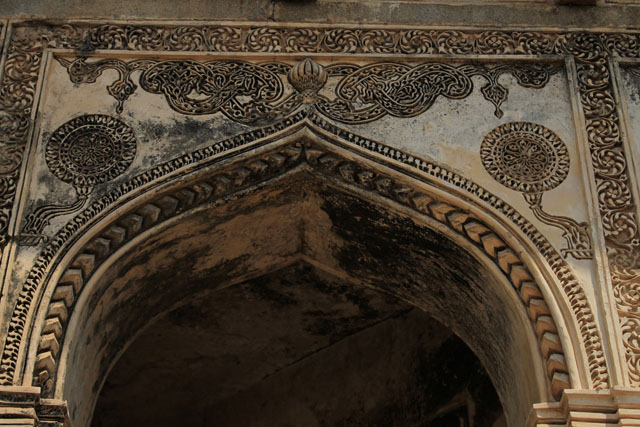 The Stucco and Tile Decorations in Qutb Shai Tombs and Mosques 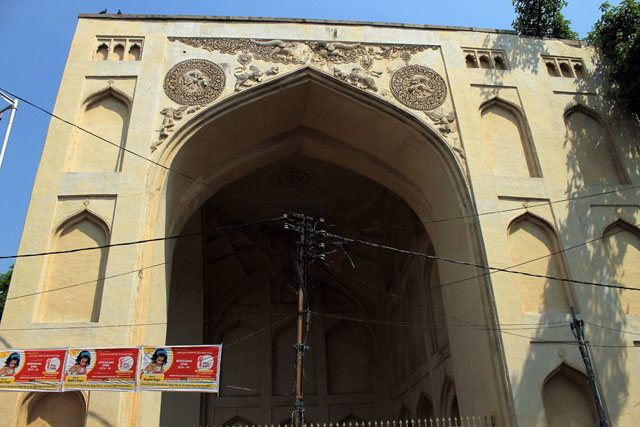 Tile decoration was also a prominent feature, but only in fragments have survived. Qutb Shahi were fervent Shias and constructed halls to accommodate the annual ceremonies commencing the martyrdom of Hussain, the Prophet’s grandson. The finest of these Shia halls is Badshahi Asurkhana in Hyderabad. Its interior is covered with mosaic tiles, the finest in India, forming one of the most original decorative schemes of its kind anywhere in the Muslim world. 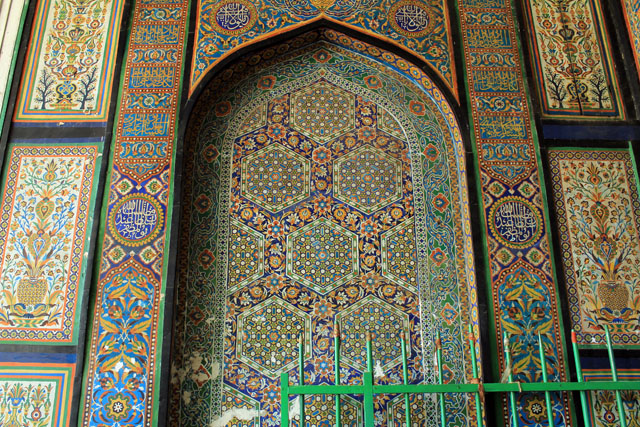 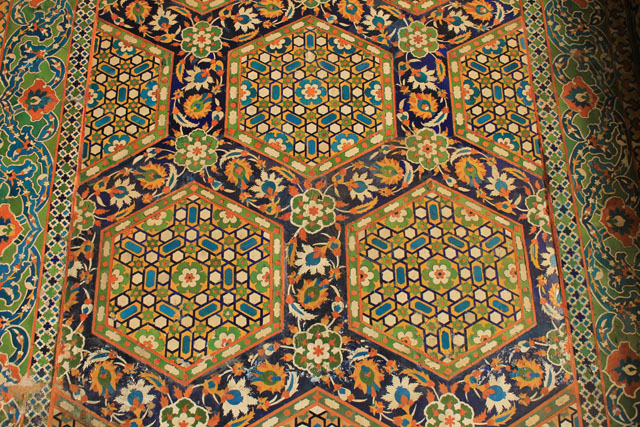