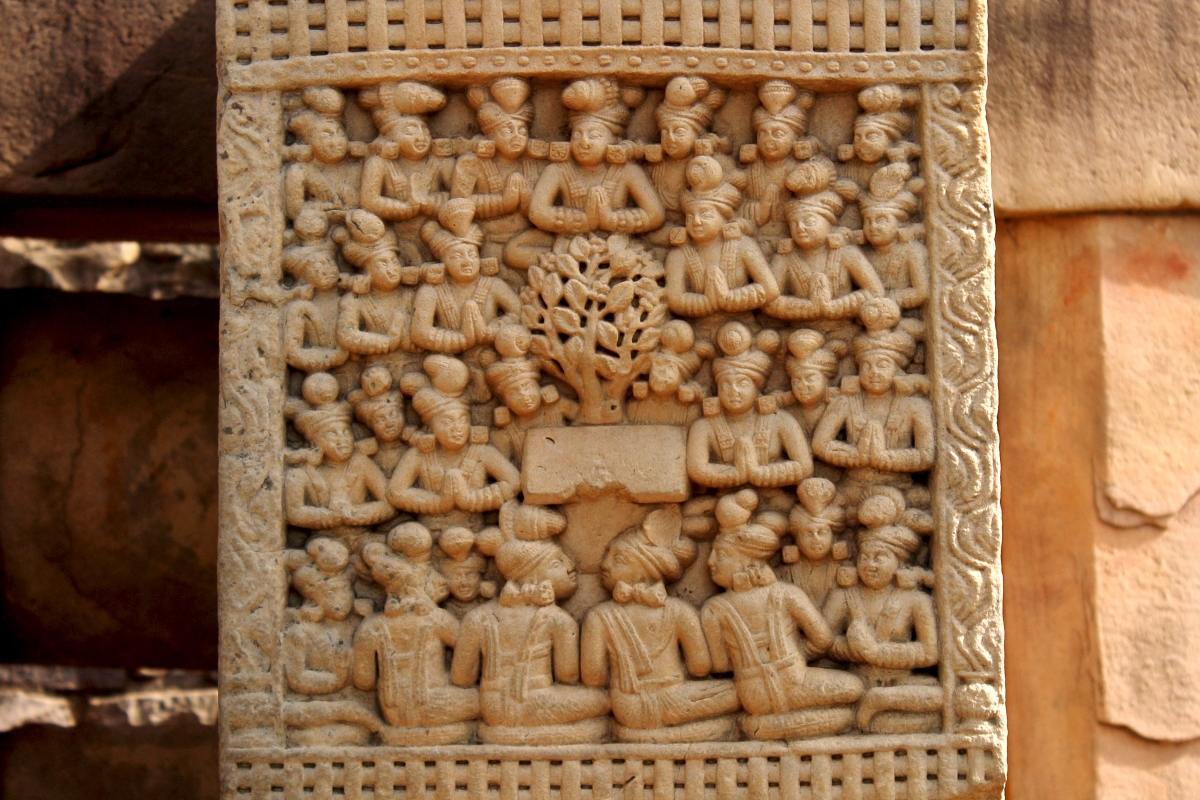 In the middle of 3rd century BC, India had gone through a traumatic event, the Kalinga War, but its consequence had far positive reaching. The Kalinga War transformed Ashoka from being a cruel king to a man of compassion, and an ardent follower of Buddhism. Till then Buddhism had spread its wings to the whole of Gangetic Basin, but without much imperial patronage.

Ashoka’s adoption of Buddhism opened up new possibilities. Buddhism got spread far beyond Gangetic Basin to Afghanistan in the west and Sri Lanka in the southeast. In succeeding centuries under the Sunga and Satavahana rulers, Buddhism became a religion of mass and it was a common sight seeing people travelling to pilgrimage sites associated with the life of the Buddha and contributing immensely for the construction of monasteries and stupas. New ideas were filtering through interactions between merchants and pilgrims from Indian subcontinent and the silk routes.

At the beginning sprawling Buddhist monasteries and stupas evolved at prominent sites, such as Sarnath and Bodhgaya, but in course of time several new centres evolved on trade routes and near important urban centres. One of these was Sanchi, a pristine hill near the ancient city of Vidisha. Sanchi had evolved as a centre of pilgrimage mostly due to Ashoka’s patronage and also due to its strategic location.

The monasteries of sanchi have lavishly carved stone railings surrounding stupas. These railings were provided by merchants, artisans, farmers and their family members who came to the site on pilgrimage. The railings were collectively patronized, with each relief provided by a different pilgrim. Writing was important to the merchants since they had to maintain inventories. Most of these people had got attracted to Buddhism mainly due to the religion’s liberal attitude to trade and moneylending and emphasis on equality. These people had relatively low status in the caste hierarchy. 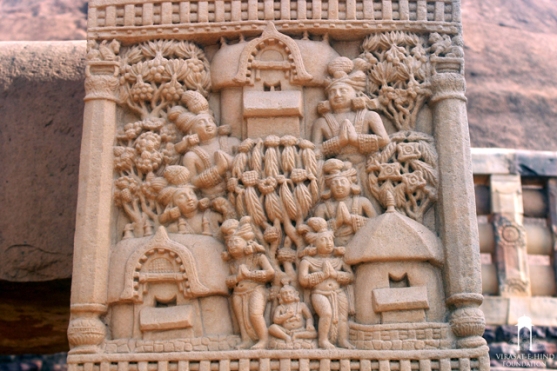 Not only railings, but also gateways with depictions of narratives had been erected by the pilgrims. Events from the life of the Buddha were profusely illustrated in narrative reliefs that are generally confined to single rectangular panels in the gates or toranas and covering an entire crossbar.

Artistically speaking, the reliefs are fully modelled revealing rich shadows and lighting. They boast also the everyday life in Ancient India, from farming to trading and picnicking to celebrating festivals. Women constituted a third of donors to Sanchi’s railings and gateways. 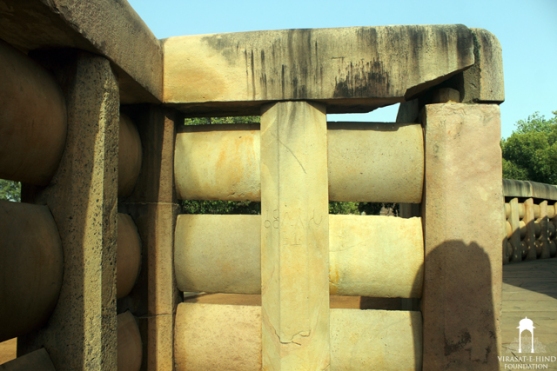 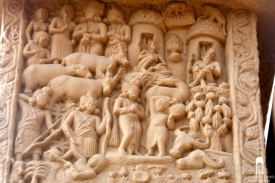 A significant feature of these panels is that the Buddha is not shown in human form in any of the reliefs. Instead, he is symbolically shown through objects such as thrones, trees, wheels and footprints. It is debated among scholars why the Buddha is not represented in human form in early Buddhist art of the Subcontinent. Perhaps it was believed that Buddha as human was thought to lessen his achievement of enlightenment when he transcended mortal concerns after 549 incarnations. His unseen presence may have been deemed more potent than the guise of an ephemeral human being.