‘Kaziranga excites the senses, arrests the soul. It beckons a visit’. The inviting tag line of Assam Tourism captures the essence of a National Park that is the pride of Assam and a celebrated success story of wildlife conservation in India in a lilting tone. And why not. After all, Kaziranga, is where the heavyweights of the wildlife world hobnob. It’s an exclusive club where the life members are the one horned Rhinoceros, the Elephant, the Bengal Tiger, the wild Asian Water Buffalo and the Eastern Swamp Deer. The waters of Brahmaputra, one of the four rivers that criss cross this swampy marshland of tall grasses, harbour the endangered Gangetic Dolphin. Its moist deciduous forest is home to the only ape in India, the Hoolock Gibbon and two of the largest snakes in the world; the Reticulated Python and the Rock Python. But this is just the beginning as the park has many surprises up its sleeves. 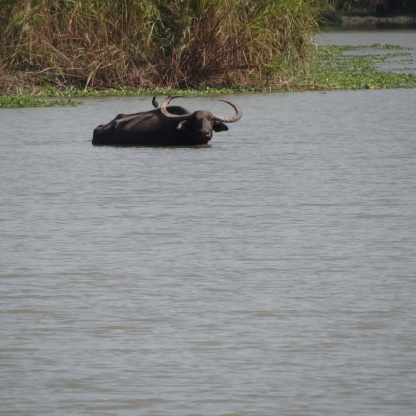 One Horned Rhinoceros and Elephant

Kaziranga is one of the most protected national parks in our country. This conservation saga has an unheralded hero; Balaram Hazarika or Nigona Shikari, as the locals called him. He was a mahout and knew the area in and around Kaziranga like the back of his hand making him the most sought after guide in the region. So, when one fine day in 1905, Lady Mary Victoria Lieiter Curzon was visiting a relative’s tea estate in the region, Balaram was called upon to escort her deep into the jungles for a glimpse of the Rhinoceros. She could not see the 3 tonne giant but had to satisfy herself with its pugmarks. Disappointed, she asked Balaram, what could be the reason behind the dwindling population of Rhino and how they could be saved. He simply said – “Stop the sahibs from killing them”. On her return to Calcutta, Lady Curzon pressed her husband who was the Viceroy of India to issue orders that would prohibit the hunting of Rhinos in Assam.

On 1st June 1905, an area of 57,273.6 acres was declared as the Kaziranga Proposed Reserve Forest, and in 1908 it was established as a Reserve Forest. In 1926 Kaziranga was declared a Forest Reserve and hunting was banned. In 1974 it was declared a National Park. Thus began the story of conservation in Kaziranga. Along with extra square miles that were being added regularly, many honours and titles also kept pouring. In 1985, UNESCO bestowed on Kaziranga the status of a World Heritage site. In 2006, it was declared a Tiger Reserve by the Government of India. Kaziranga has also been identified as an Important Bird Area by Birdlife International. The increasing numbers of Rhinoceros in the park are equally impressive. From a paltry 12 in 1905 to 2,401 in 2015, according to the 12th Rhino population estimation exercise conducted by the Assam forest department.

But all is not well with Kaziranga. The sahibs are long gone but poaching continues unabated. The Bison was last spotted a decade ago. Elephants, Tigers and Rhinoceros are hounded and killed for their body parts that fetch a high sum in South East Asian countries where they are used as ingredients for preparing traditional medicine. To protect the animals, the park officials in 2014 had decided to detusk the Elephants and dehorn the Rhinos. Thankfully the proposal was vehemently opposed and ruled out.

The landscape of Kaziranga is dotted with lakes called beels and elevated regions called chapories. The chapories act as a retreat for animals during monsoon when the Brahmaputra floods the entire region. The forest officials have built many artificial chapories for the wild animals of the park. But this does not stop the Elephants, Rhinos and Tigers along with other small herbivores to migrate en masse to the Karbi Anglong Hills, a few kilometres away from the southern periphery of Kaziranga. Once the animals cross the highway, the Assam forest department and the state government become helpless. For Karbi Anglong, according to Schedule 6 of the Indian Constitution, is an autonomous region. It is governed by a Hill Council with laws of its own. A state within a state.

The thickly forested slopes of Karbi Anglong Hills are a refuge for not only wild beasts that roam around on four legs but also those with two legs. It is a stronghold of the Maoists who poach the wild animals to fund their nefarious activities. Dimapur is the hub of wildlife trading in the region. The terrorists use the animal parts as a currency and exchange them to procure firearms and other terror paraphernalia. Rhino horn with an estimated value of Rs. 1 crore fetches them the maximum booty. Hill councils are known to be very fierce about protecting nature and a traditional way of life that believes in co-existing with the wild. So, it does come as a surprise that the Karbi region has scores of stone crushing units and a few open markets that deal in forest timber.

Like the tentacles of the mythical sea serpent Hydra, the problems of the forest and government officials of Assam, are many and every time a tentacle is cut, it resurfaces with two more. With land grabbers and poachers hot on its heels, how long and how well will the elite of the Kaziranga club survive is a troubling question that is difficult to answer. Am waiting for Hercules to grab the Hydra by its throat and cauterize it.

But till that miracle happens, let’s keep the wild animals away from our tomfoolery, please. They can neither make out invisible state borders nor can understand politics. Let them roam free.

The author can be reached at zchhapiwala@gmail.com

All the pictures used in the post are courtesy Mr. Nirdesh Singh