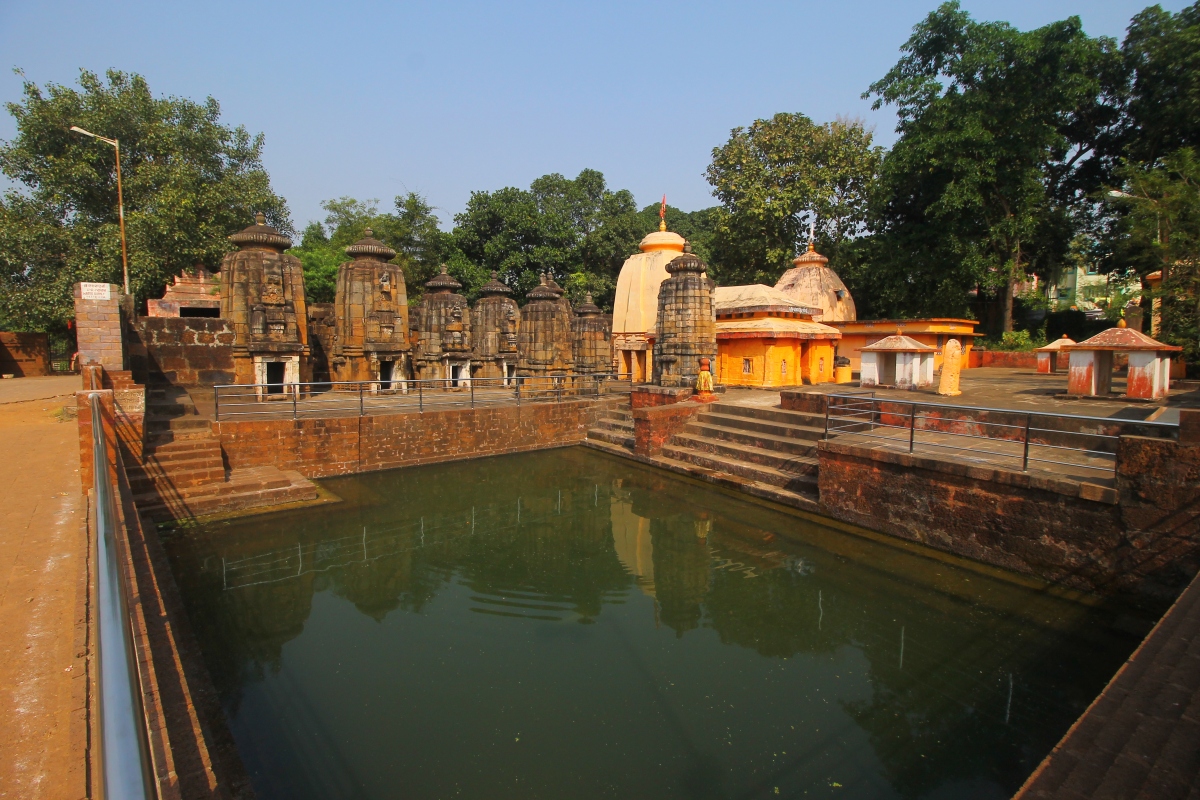 According to ancient scriptures, deities reside near a clean water body. A temple therefore should be built, where there is a pond on the left, or in the front, not otherwise. In Vedic Period, a water body was compared to a cow, the symbol of wealth, fertility and prosperity. It was believed that water goddesses had the ability to cleanse and purify the worshippers from moral sins and bestow long life, wealth and immortality. Ganga stands as the biggest example of this belief.

According to a scripture, one who digs a well for people has (as a consequence of) half of his sins absolved when the waters begin to flow. One who dedicates a pond is forever happy (free from thirst) and attains the world of Varuna. Therefore, construction of ponds, wells and reservoirs is considered a sacred act deserving the highest merit.

As years went by, Kshetra and Tirtha became essential elements of Hindu pilgrimage and wisdom. According to traditional Hindu belief, life is nothing but a pilgrimage, which does not end with death as it does not bring the final release (Moksha).

For the blessed ones, Moksha from all conditions of existence is gained through Brahmavidya; the realization of the Supreme or the knowledge of the Absolute. Some attain it in life, others at death. For mere mortals who do not traverse the high plane of thought and contemplation, there are other paths prescribed by scriptures, such as embarking on a pilgrimage. Places of pilgrimage are distributed throughout the country and are called Kshetras or Tirthas.

Tirtha is a place of pilgrimage situated on the bank of a river, sea shore or lake. Water, the purifying and fertilizing element is the essence of a Tirtha and bathing in it reinforces inner realization. Hindu beliefs also say that, Tirthas are the pleasure gardens of gods where they are engaged in eternal play. Therefore, a temple is built near a water source and if there is none then a tank / pond is built near it. 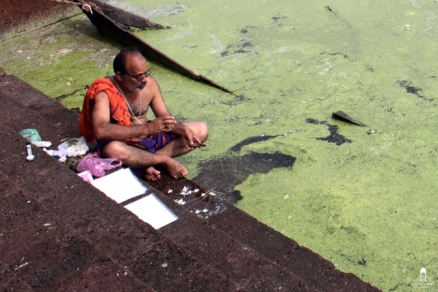 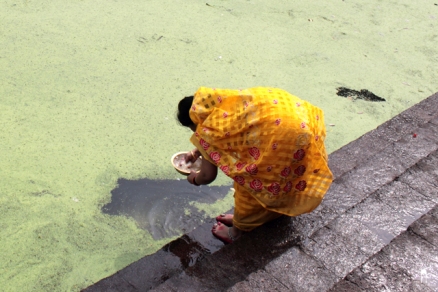 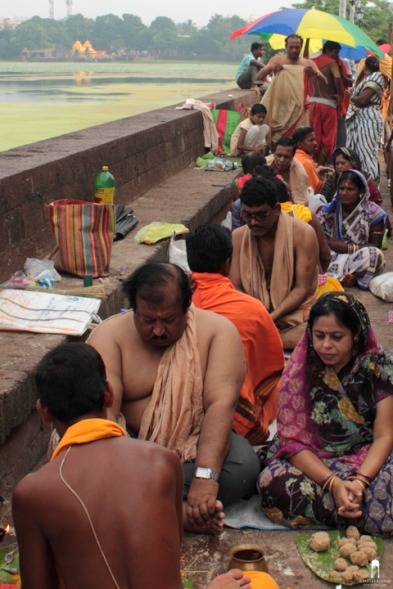 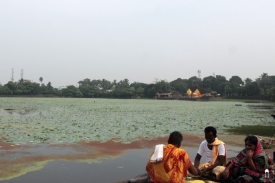 This was our ancestor’s way of ensuring consistent supply of water that could be drawn upon in times of drought. Many water bodies in an area would mean increased water table and the tanks would also act as rain water harvesting structures. By declaring the waters sacred, it was ensured that they remained clean and potable. An ingenious way of managing water resources.

Bhubaneswar, the modern capital of Odisha was historically known as Ekamra Kshetra. The sacred Kshetra was 10 miles in circumference with the Lingaraj temple and the adjoining Bindu Sagar as its centre. According to Ekamra Purana, 7000 temples existed in the vicinity of Bindu Sagar, of which only 500 remain extant. Together they represent the evolution of Kalinga School of temple architecture between 7th and the 13th centuries CE. 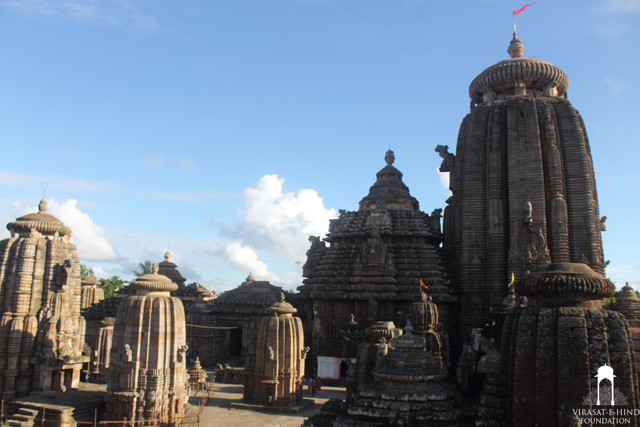 Bindu Sagar is the largest holy tank in Bhubaneswar.  Rectangular in plan; measuring 450 m in length, 175 m in breadth and 7 m in depth. It was built between 7th – 8th century CE.

At the centre of Bindu Sagar is a pidha shrine that is locally known as, Jagati. During Chandan Yatra, a festival associated with Lord Lingaraj held in the month of May, the Lord visits the shrine on a boat. 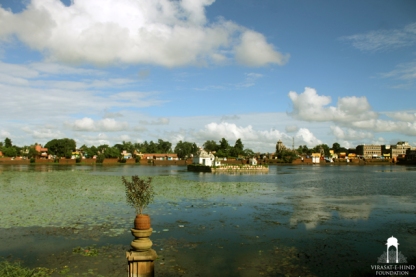 According to a legend, Shiva and Parvati after their marriage settled down in Varanasi. With the passage of time, Varanasi became thickly populated. So they left Varanasi and arrived at Ekamra Kshetra. At that time, it was under the control of two demons Kirti and Vasa. Parvati killed the two demons by pressing them into the ground with her feet. The particular place where the demons were buried became famous as Devi Padahara. A large square tank located behind the market in front of the Lingaraj Temple is identified as the Devi Padahara Tank. 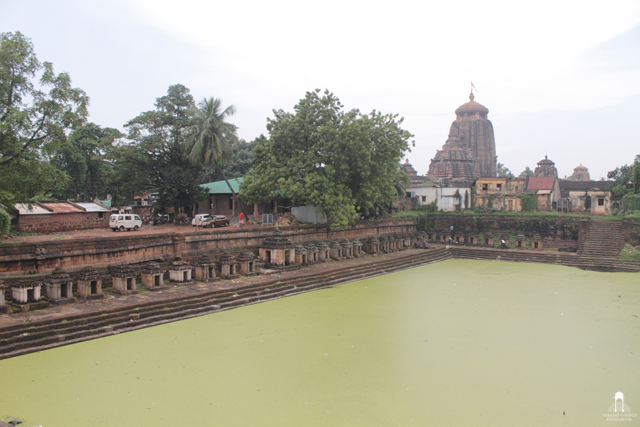 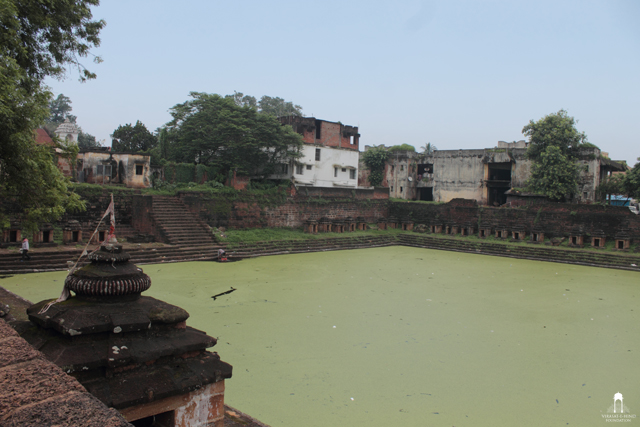 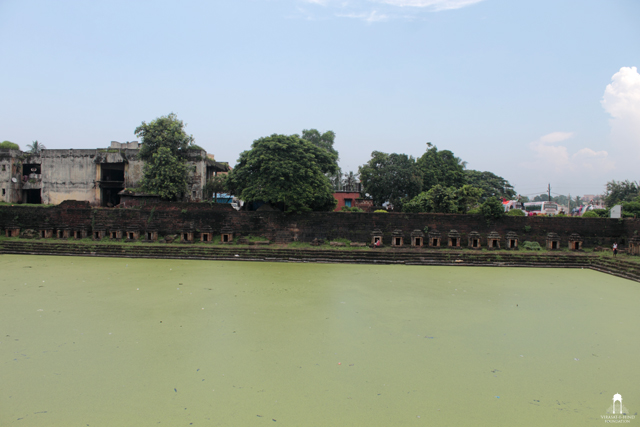 After killing the demons, Parvati felt thirsty and to quench her thirst lord Shiva struck his trident from where a spring rushed forth. A masonry tank was built around the spring waters which was sanctified by mixing it with the waters of all rivers and streams of India. This tank is the Bindu Sagar.

Throughout the year, on the banks of Bindu Sagar, local residents carry out special rituals called ‘Tarpan’. Family members offer food and prayers in the belief that the departed souls will have a smooth transition to heaven. Pind are balls made of rice flour, wheat, sesame seeds, honey and milk. Seven pinds are made and offered to the departed souls during the Shraddha.

Apart from Bindu Sagar, Bhubaneshwar boasts of many other holy tanks that are attached to temples. One such tank is the Kedar Gouri kund located beside a temple of the same name. It is believed that a single sip of water from this tank frees oneself from the repeated cycles of birth and death. The waters of Marichi kunda, attached to the nearby Mukteswar Temple is said to bestow fertility. Barren women hoping to give birth to sons take a dip in this tank on the night before Ashokashtami that is celebrated during Chaitra Navratri. 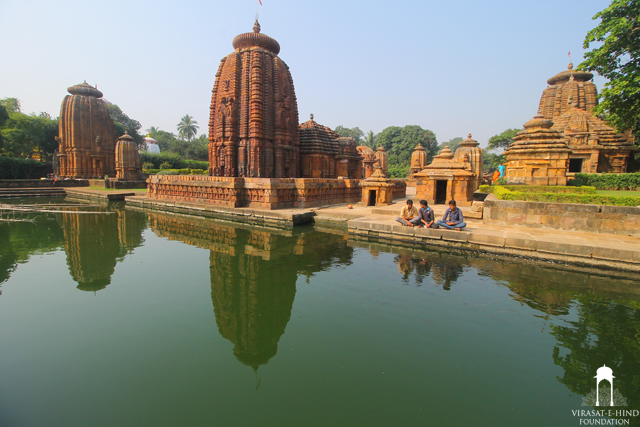 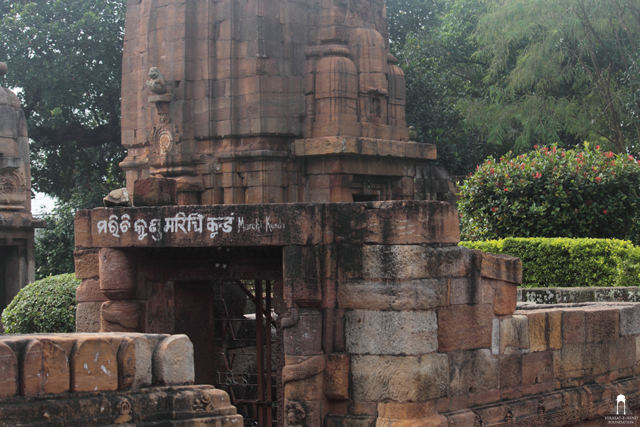 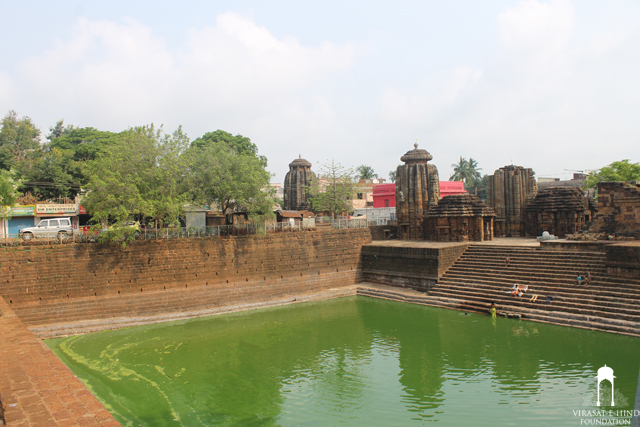 Another important tank of Ekamra Kshetra is the Manikarnika Tank. According to legend, Goddess Parvati lost her mani-kundala (earrings) while fighting with the demons Kirti and Vasa. The earrings were discovered when Lord Shiva struck his trident upon the earth near the Kapila-kunda. Parvati offered the rings to Lord Kapileswar. Hence another name of Kapileswar is Kapila muni (Sage Kapila) and the tank from where the earrings were recovered is known as Manikarneswara kunda (tank).

Kotitirtha is another tank that is revered among locals as a sacred place for cleansing their sins. The tank is used for various ritual practices like offering pind daan (funeral rituals) and is also a Panchatirtha (five holy places), the other four being Ganga-Yamuna, Bindusagar, Devi Padahara and Papanasini tanks. 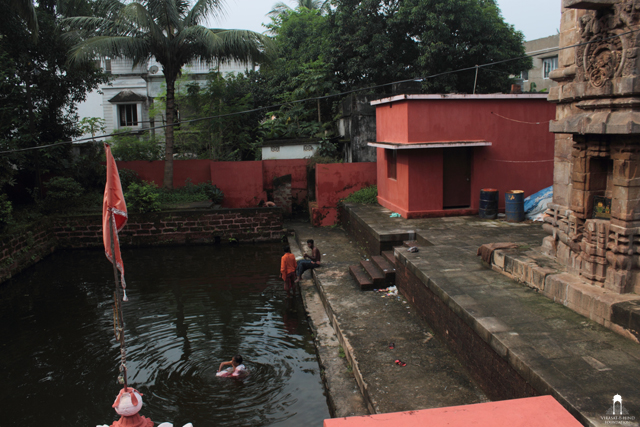 According to a legend, a Sage named Sajoti performed severe penance here abstaining from food and water. Pleased with his penance, Lord Shiva appeared before the Sage and granted him a wish. The sage requested Lord Shiva for a kunda (tank) that would cleanse the sins of human beings. Lord Shiva created this tank, which is aptly named Papanasini.

Today, with rapid urbanization and commercialization, some of the sacred tanks of Ekamra Kshetra have lost their purity. What once used to be waterbodies of immense medicinal value are now filthy and polluted. Steps need to be taken urgently to revive and retain these tanks in their pristine condition. Ekamra Kshetra is now a Smart City but how smartly it manages its water resources remains to be seen. 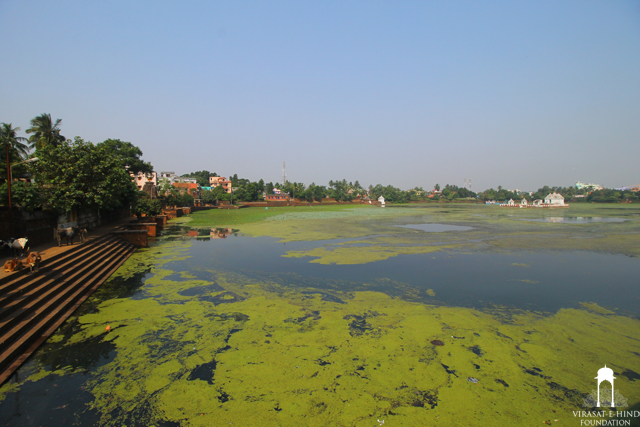