It was a short flight of stairs that descended into a runnel. Minutes before I took the stairs, I was delighted to see three beautiful Blue Mormons playfully chasing each other. Its iridescent blue dots on velvety black wings are hard to miss though one could easily mistake it for a small blue bird due to its size. Blue Mormon is the second largest butterfly found in India and is endemic to Western Ghats unlike the bright yellow Southern Birdwing which is the largest butterfly found in the country and can be spotted throughout peninsular India.

This was surely their favourite haunt as I kept coming across them every now then either perched on the Pagoda flowers hedged outside the village houses or disappearing into patches of arecanut and cashew plantations that dot the densely forested Sattari taluka in Goa. We were playing hide and seek with zero chances of my turn to hide.

The water felt as cool and fresh as the air did. I ventured a little further and drank many fistfuls of sweet spring waters from the slightly deep pool ahead. We had standing instructions, literally, to remove our footwear and venture no further than a few steps in any direction except exit. At that instant I knew why this place felt so different. It was a sacred grove where no human was allowed to interfere with nature. Here the forest was the abode of a deity and even scavenging leaf litter was sacrilege. But Nirankaranchi Rai, Forest of the Formless one, is more than a Devarai for it is a swamp. A rare Myristica Swamp with a micro climate that harks back to Gondwanaland and populated with trees of the Myristicae species that are probably the second oldest flowering trees on the entire planet. Our very own spices Nutmeg and Mace that are not just used for flavouring but also as a traditional medicine. In olden times, people carried mace in sachets for its fragrance and believed that inhaling its fumes when burned with incense could increase ones mental powers.

According to the continental drift theory proposed by Alfred Wegener in his book The Origin of Continents and Oceans, all the continents formed a single land mass called Rodinia. In the Pre-Cambrian period that is around 750 million years ago this supercontinent began to drift apart. Not much is known of those times and the only surviving relic of that period is the Aravalli range of mountains. The drifting continued directionless and 270 million years ago the floating landmasses again fused together to form Pangea. This is the time when species of every kind evolved and forests sprung up. Owing to tectonic pressures, around 175 million years ago, Pangea split into Laurasia and Gondwana.

What drifted apart and got separated were not empty land masses but biospheres harboring pristine habitats such as the Myristica Swamps. Even today these swamps are found near the rift regions such as Madagascar and the Western Ghats in India. They are places that take you back to the very origin of the land and its workings can provide valuable insight into the history of geography and biology. Looking at the crooked forms of tall tress curving and rising above me to form a tight canopy, I cannot but agree. These are unlike any trees I have ever seen. This is Jurassic park and here live giant dinosaurs that are rooted in time and space. 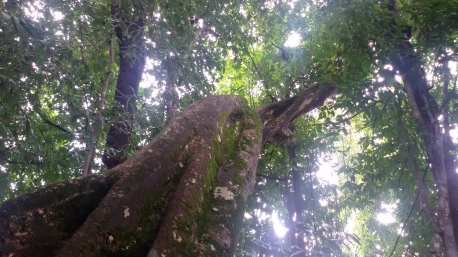 According to an article in The Hindu dated July 12, 2016 ‘A study by the scientists of Agarkar Research Insitute, Pune, published recently in the journal, Quaternary International, describes the discovery of plant fossils of the ancient Myristica swamps from the Konkan coast. The fossils, estimated to be 44,000 years old, throw light on the evergreen vegetation along the Konkan coast. The study infers that Konkan lost its wet evergreen forest cover due to the changes in the monsoon pattern.

Studies have shown that the swamps, which would have occupied large swathes of the thickly- wooded Western Ghats in the past, are now restricted to less than 200 hectares in the country.

“As of now, the Myristica swamps of the Western Ghats are fragmented, with Kerala holding a major share of this habitat. Leaving aside a few more patches in Karnataka and Goa, this exceptional wetland has almost disappeared from the Indian subcontinent due to the climatic vicissitudes over the last 18,000 to 50,000 years, a period referred to as the Late Pleistocene period,” said K.P.N. Kumaran, CSIR Emeritus Scientist, ARI. 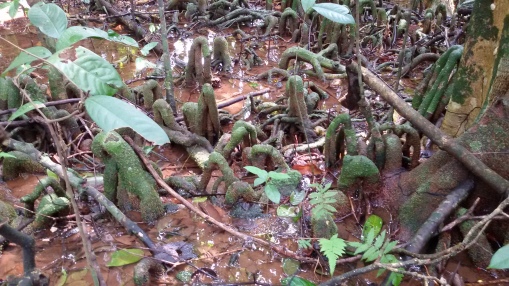 Nanoda village. This must have been a contiguous tract of swampy forest once. Today, swaying green paddy fields have taken over the wetland and its soft loamy alluvial soil. This, despite the fact that Goa is the only state in the country that has protected its entire stretch of Western Ghats. For once, I have no issues with blind faith because if not for the sacred tag we would not have these pristine patches of forests left. It is doing what the conservationists are not being able to do with all their facts and figures. But for how long. I know not. All I know is that Myristica Swamps are ecological monuments that need to be preserved for posterity.

As the knife point rays of sun pierced through the unrelenting canopy turning the dark green leaves to bright, as the Blue Mormons flitted about, as the Malabar Giant Squirrel stealthily rested on the branches eluding and alluring at the same time, I knew I was going through an ancient experience. I wondered about the timelessness of time and was reminded of what Herman Hesse once said ‘Trees are sanctuaries. Whoever knows how to speak to them, whoever knows how to listen to them, can learn the truth. They do not preach learning and precepts, they preach, undeterred by particulars, the ancient law of life.

A longing to wander tears my heart when I hear trees rustling in the wind at evening. If one listens to them silently for a long time, this longing reveals its kernel, its meaning. It is not so much a matter of escaping from one’s suffering, though it may seem to be so. It is a longing for home, for a memory of the mother, for new metaphors for life. It leads home. Every path leads homeward, every step is birth, every step is death, every grave is mother.

So the tree rustles in the evening, when we stand uneasy before our own childish thoughts: Trees have long thoughts, long-breathing and restful, just as they have longer lives than ours. They are wiser than we are, as long as we do not listen to them. But when we have learned how to listen to trees, then the brevity and the quickness and the childlike hastiness of our thoughts achieve an incomparable joy. Whoever has learned how to listen to trees no longer wants to be a tree. He wants to be nothing except what he is. That is home. That is happiness.”

This was not my last visit and I went back to Nirankaranchi Rai again after a few months. Nothing had changed. In a rapidly changing world where even roadsides refuse to look the same with the passage of time, we need places that belies the adage ‘Change is the Only Constant’. Today on World Forest Day, I appeal to one and all to save Myristica Swamps of Western Ghats and hold on to it as we would to a relic from our distant past. Just that this relic is living and supports a lot of other life as well.