One of the most famous disciples of Gautama Buddha during his lifetime was King Bimbisara. He invited Gautama Buddha and his Sangha members for a meal at his royal court – the Rajagriha. While having dinner, sitting next to Gautama Buddha, the King wondered: ‘Where could I find a place for the Blessed One to stay; neither too far from the village, nor too near; with easy commute, and accessibility to people seeking him; away from the crowds and sounds, where the Buddha and his disciples could be sequestered in peace; a place well suited for a renounced life.’ At that moment, it occurred to Bimbisara: ‘There is Veluvana, my pleasure garden, which is neither too far from the town, nor too near; and is easy to commute to and from. What if I make an offering of the Veluvana to the fraternity of monks, with the Buddha at its head?’ Thus, Veluvana became one of the first monasteries in the Buddhist world. Here, the Buddha delivered a sermon in which he outlined the code of conduct for monks.

Over the centuries, the Sangha tradition grew and spread widely across the subcontinent.  What was begun by Bimbisara was continued by merchants and traders, along with Kings and Ministers, who actively donated dwellings to Buddhist Sanghas. Some were brick and bamboo structures, while several others were rock-cut caves. Among the caves, those that have survived till date, the best ones in terms of artistic merit and technology used, are the rock-cut caves of Ajanta located across the Sahyadri Mountains. 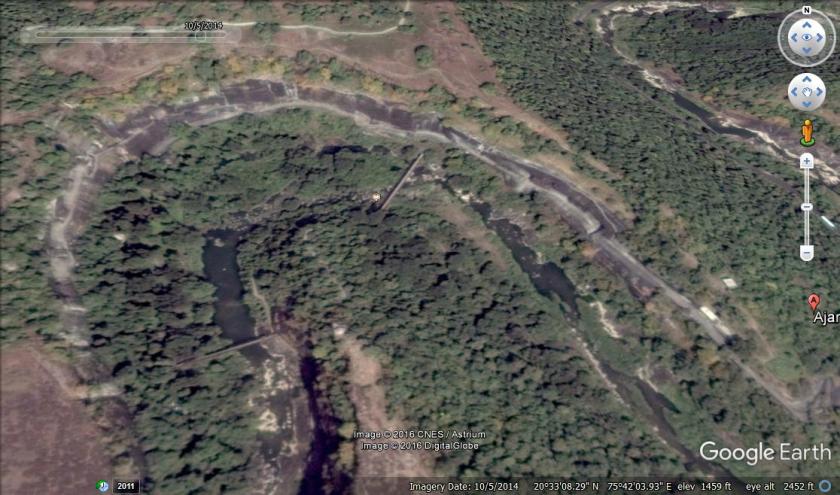 Gautama Buddha (original name Siddhartha) was born in a royal family at Lumbini (modern day Nepal). It is said that his mother Mahamaya had a dream, while she was pregnant, wherein she saw a white elephant entering her womb. The royal astrologer interpreted this as symbolic of her having conceived a son who would either be a great emperor or a religious teacher. This episode is beautifully narrated in a panel inside Cave 2. 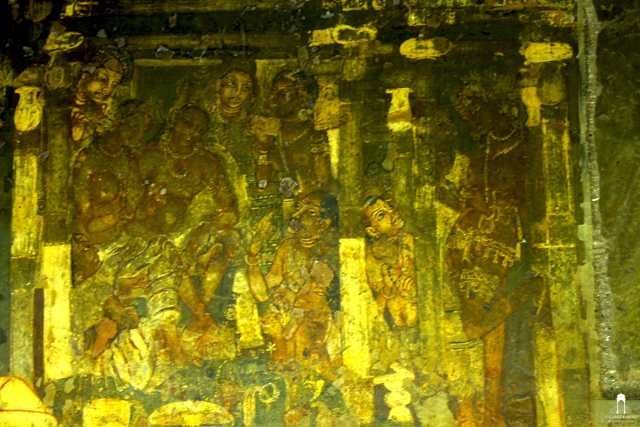 One day, when the young Prince Siddhartha was touring his kingdom, he came across three instances of human suffering – an old man with infirmities; a very sick man; and a dead body. He got very disturbed. However, another day, he saw a beggar who was at peace with himself. Siddhartha was convinced that he must strive to relieve people from suffering. Therefore, he renounced his kingdom and became a wandering ascetic.

The Buddha achieved enlightenment while meditating under a Bodhi tree at Gaya (modern day Bihar). Afterwards, he went around teaching people and had several followers, including members of the Royalty. The Buddha died (achieved Nirvana) at the age of 80 years at Kapilavastu (modern day Piprahwa in Uttar Pradesh). 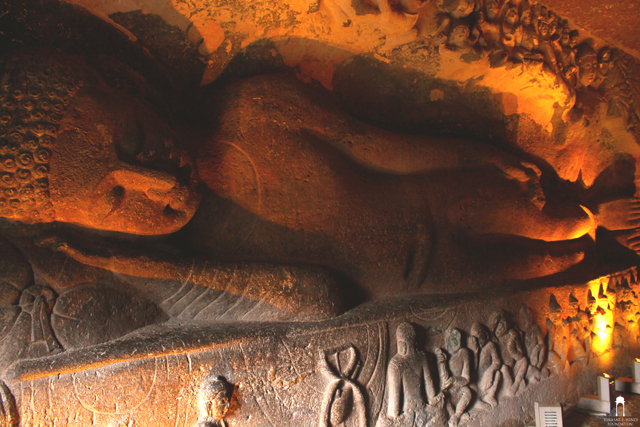 Early Buddhism in the Deccan:

Deccan is a land of great natural diversity. On its west lies the Arabian Sea, where ports like Sopara and Kalyan flourished, serving as marine hubs for Ancient India’s West-borne trade. The ports were emporia for the Indo-Greek and Indo-Roman trade that not only brought wealth but ideas as well, from far and wide. These ports led to the development of several trade routes across the mountain passes and valleys, connecting hinterland (example: Paithan) with the cities of central and North India (examples: Ujjain and Kosambi). After the fall of King Ashoka’s Empire, the western branch of the Satavahana dynasty ruled from Paithan. Though they were Hindus, they significantly contributed to the monastic establishments of Buddhism. The rocky outcrops of thick basalt and the serenity of forest provided excellent backdrops for large monastic establishments. Ajanta and Pitalkhora were two among the best known early establishments that can be traced back to the 2nd century BCE. 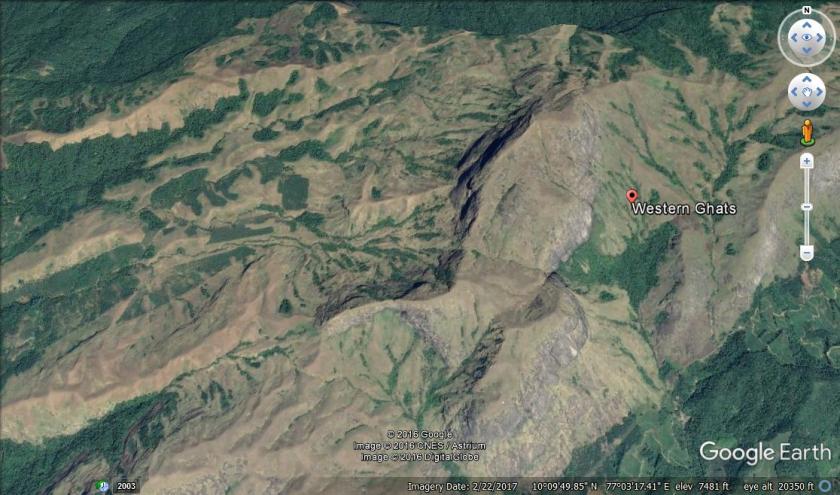 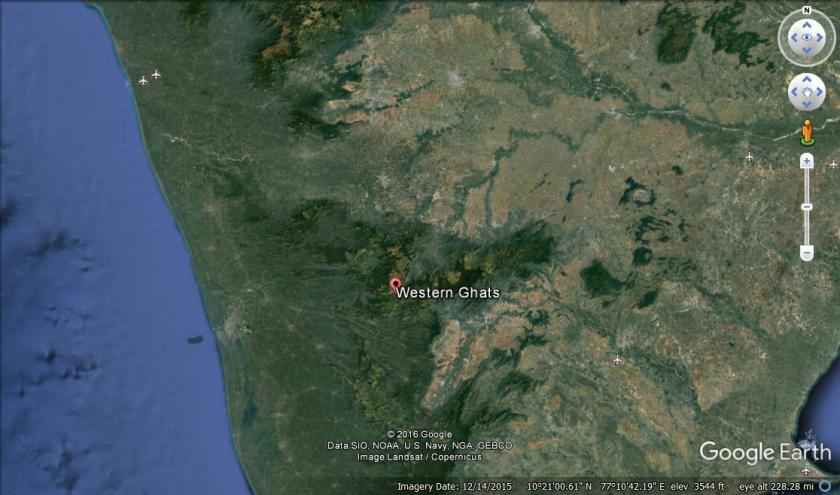 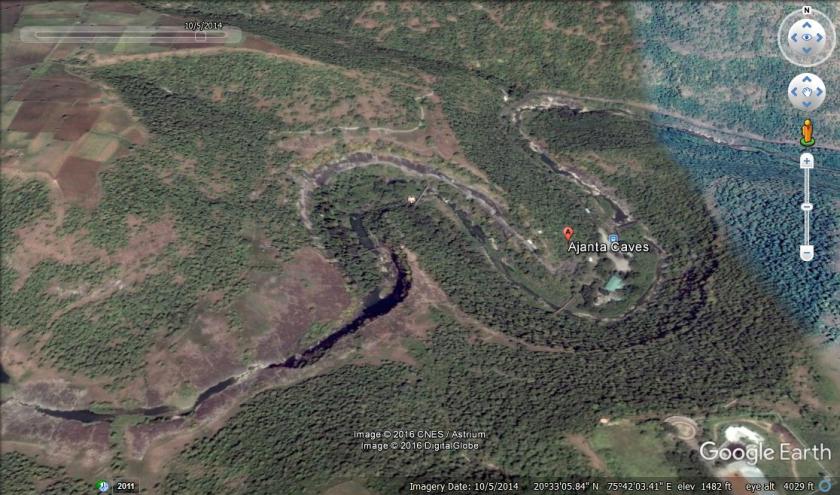 Ajanta is nestled in a horseshoe shaped ravine of the Indhyadri Hills, overlooking the Waghora River. The site is a place of tranquillity and contemplation. Ajanta has a total of 28 caves of which caves number 9, 10, 12 and 13 are of the early phase, i.e. of the Satavahana Period. Among these, caves 9 and 10 are Chaityagrihas (Buddhist Prayer Halls), and caves 12 and 13 are Viharas (Monasteries).

A Chaitya is a Buddhist shrine or prayer hall with a stupa at one end. Chaityas were built for ritual circumambulation by monks around the stupa, which symbolizes the Buddha in the Hinayana sect.

The stupa consists of a cylindrical base, with a dome on the top and is crowned by a square box like feature called Harmika, which in turn is surmounted by a triple umbrella made of wood. When the Buddha was breathing his last, he called his disciples and advised them to erect stupas over his corporeal remains after his death (Nirvana). Rock-cut stupas, which are copies of structural ones, also sometimes enshrine the relics of some venerable Buddhist monk. These relics were placed in a reliquary, in a small hole cut out in the dome of the stupa.

The Prayer hall is supported by columns and the circumambulatory path is around the stupa. The columns slope inwards, akin to wooden columns that would have been structurally necessary to keep the roof. The ceiling was barrel vaulted with wooden ribs set into them. A large horseshoe shaped window – the Chaitya window, was set above the arched doorway, and the whole portico area was carved to imitate a multi-storeyed building with balconies and windows.

Cave 9 and 10 are Ajanta’s earliest Chaityagrihas. The interpretation of inscriptions engraved into the walls and pillars of cave 10 clearly establish that they were excavated by the local community. 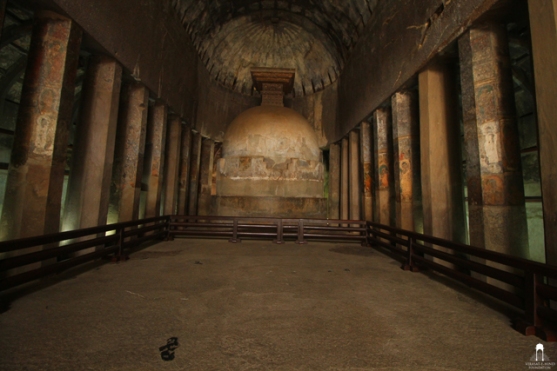 Both these caves were painted in the early period. However, what we see now are the remains of the later period (5th century CE). The only remains that can be traced to the early period are floral and geometric imprints on the upper levels of right pillars and ceilings. In cave 9, a group of men, and remains of a lengthy sequence from the Jataka tales on a sidewall, are the paintings left from the earlier phase. They are noteworthy for their subject’s unique headgears, similar to the ones at Pitalkhora.

Traces of earliest paintings in Ajanta

A Vihara is generally a square structure or cave with cells in the side walls and on the rear side, which serve as the residence for monks. The Buddha had advised monks not to stay in any place for long, and to keep wandering. It was only during the monsoon that they had to stay at one place, and were provided accommodation in caves known as Vassa-vasa, meaning ‘abode during the rainy season’.

Cave 12 is the best preserved earliest Vihara at Ajanta. A large hall surrounded by cells on three sides, the cave is simple in both its plan and design. Each cell has a Chaitya arch depicted above its doors and windows. The railing pillar below the arches is a typical architectural feature of Ancient India.

After 1st century CE, Buddhism started declining in Ajanta and its surrounding region. It was only in 460 CE, that the religion was revived under the patronage of the Vakatakas, especially Emperor Harisena (460-477 CE).

Harisena was a Shaivite, but his Prime Minister and all of his known Feudatories were Buddhists. It was they who prevailed upon Harisena to support the most ambitious project envisioned in the entire Buddhist world.

The entire project was completed in a span of 18 years. According to Prof. Walter Spink, an expert on Ajanta, ‘Ajanta’s essential development ended within a year after Harisena’s death. The work in 478 CE was done in a rush.’

Cave 7 is the first Mahayana cave in Ajanta. It represents the transitional phase from Hinayana to Mahayana. The unique feature of this cave is its double portico. Planned as a grand and lavish cave, it was reduced to a long porch connected with a modest shrine due to problems with the rock. The excavators of cave 7 had clearly not carved a cave before. It is presumed that they depended almost exclusively on the plan of earlier Hinayana caves at the site. There is a remarkable similarity in the Chaitya arch design, pillars, etc between caves 7 and 12.

The Mahayana Viharas of Ajanta (caves 19 and 26) are actually cave temples.  A revolutionary idea of the time it had a considerable impact on Ajanta’s large caves, making them more impressive and ritually significant.

The excavation that started in 460 CE had gradually advanced in the succeeding years. In 468 CE, most of the caves were made liveable. A significant development of that year was the transition from plain stupas to the images of the Buddha engraved on them. This decision was made, perhaps by the powerful Buddhist Sangha at the site. The initial spaces where this transformation was visible were the Chatityagrihas. In the front part of the plain stupa, an image of the Buddha was planned (seen both in caves 19 and 26 at the Mahayana Chaityagrihas at Ajanta). Subsequently, the idea was expanded to all the Viharas. Soon, the sculpture arrangements were elaborated, bringing in various aspects of Buddha’s life, other Buddhist divinities, semi-divine creatures, religious symbols and animals & plants. 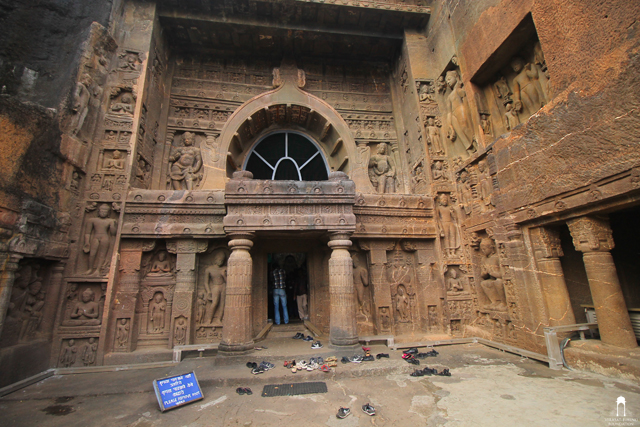 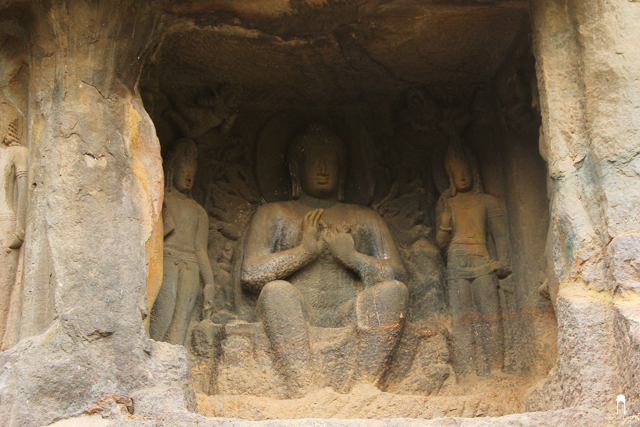 Ajanta is famous for its wall paintings. The paintings of Ajanta are perhaps the oldest surviving example of Indian classical art. These document the society of that period, depicting its various members, their attire, buildings, customs, and in general, all aspects of their daily life.

The variety in the dresses, ornaments, skin colours, hairstyles, homes and furniture is stunning. The characters are cast in a plethora of situations ranging from coronations to renunciations, intimate moments to moments of separations, and childbirth to the suffering of old age. They depict a world that is both real and spiritual at the same time.

There are also animal depictions, the most common being elephants, swans, deer and horses. The blooming of flowers, the wilting of creepers and the sprouting of leaves are sensitively painted.

The paintings vividly demonstrate the ideals of Indian art – distinct characterisation, depiction of various emotions, beauty, grace, and compassion, all in a variety of colours and shades. In consonance with the beliefs and codes of the three Worlds – Heavenly, Divine and Earthly, the artists used various shapes and sizes to depict characters like the Gandharvas, Yakshas (divine spirits), and Rakshasas (demons). The artists have used a technique where the viewer does not remain outside the paintings but becomes a part of it. Such is the realism and charm of the paintings. 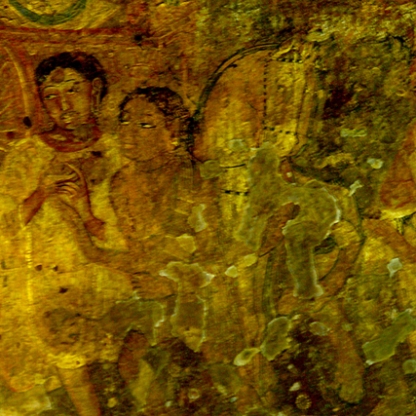 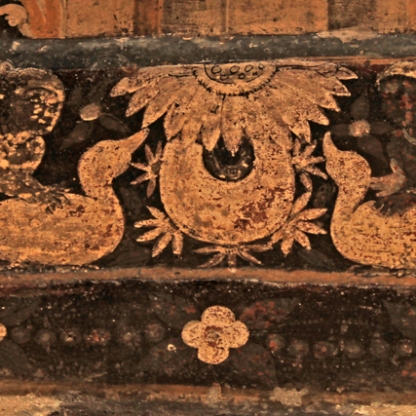 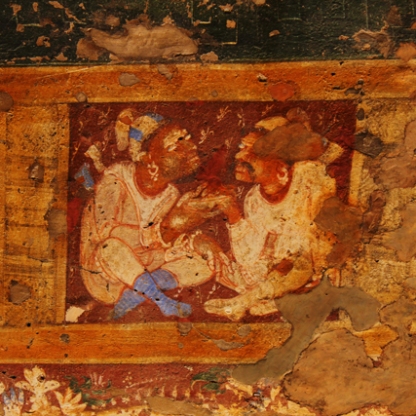 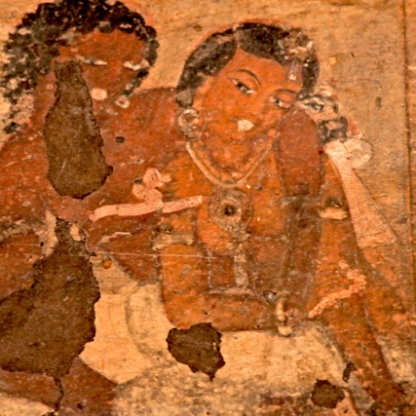 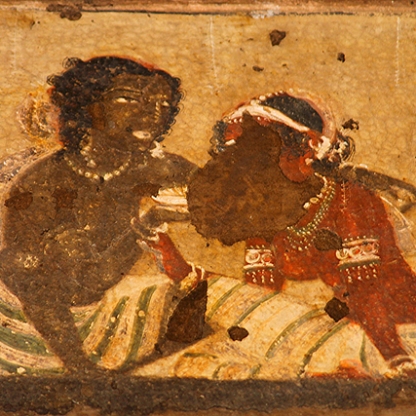 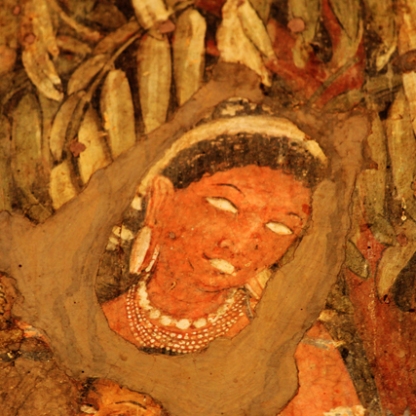 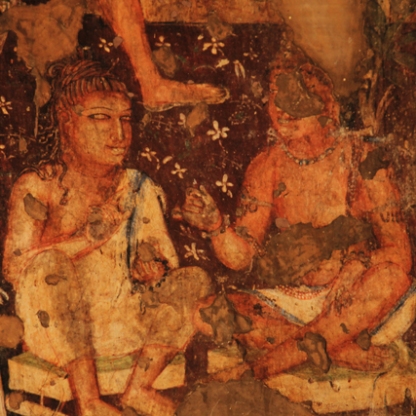 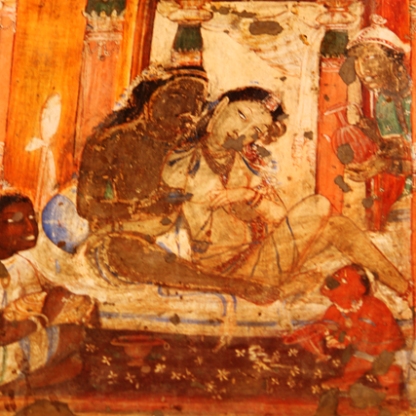 Jatakas are a collection of stories concerning the previous births of the Buddha. Before achieving enlightenment, the Buddha studied values of sacrifices, virtue and friendship in his previous lives. A Buddha in the process of learning is referred to as the Bodhisattva. The experiences of these previous lives resulted in the Bodhisattva’s ultimate transformation into the Buddha.

Each Jataka is a story of a Bodhisattva, who is either depicted as a protagonist or a supporting character. Most of the paintings of Ajanta tell stories from the Mahajanaka Jataka that is best illustrated in Cave 1. In Cave 2, a panel depicts the bed chamber of Maya, who dreamt of a white elephant entering her body. Cave 17 depicts scenes from Shada-Danta Jataka, Vassantara Jataka, Mahakalpi Jataka and Suttasama Jataka.

After 5th century CE, Ajanta did not see any major artistic activity. The first renaissance of Indian art was lost in time. However, the artists who created the 5th century wonders did not lose their tradition. They, and their descendants, carried the tradition to India’s neighbouring countries. For example, the paintings of Sigriya caves in Sri Lanka, also created around the same period, show remarkable similarity with Ajanta paintings.