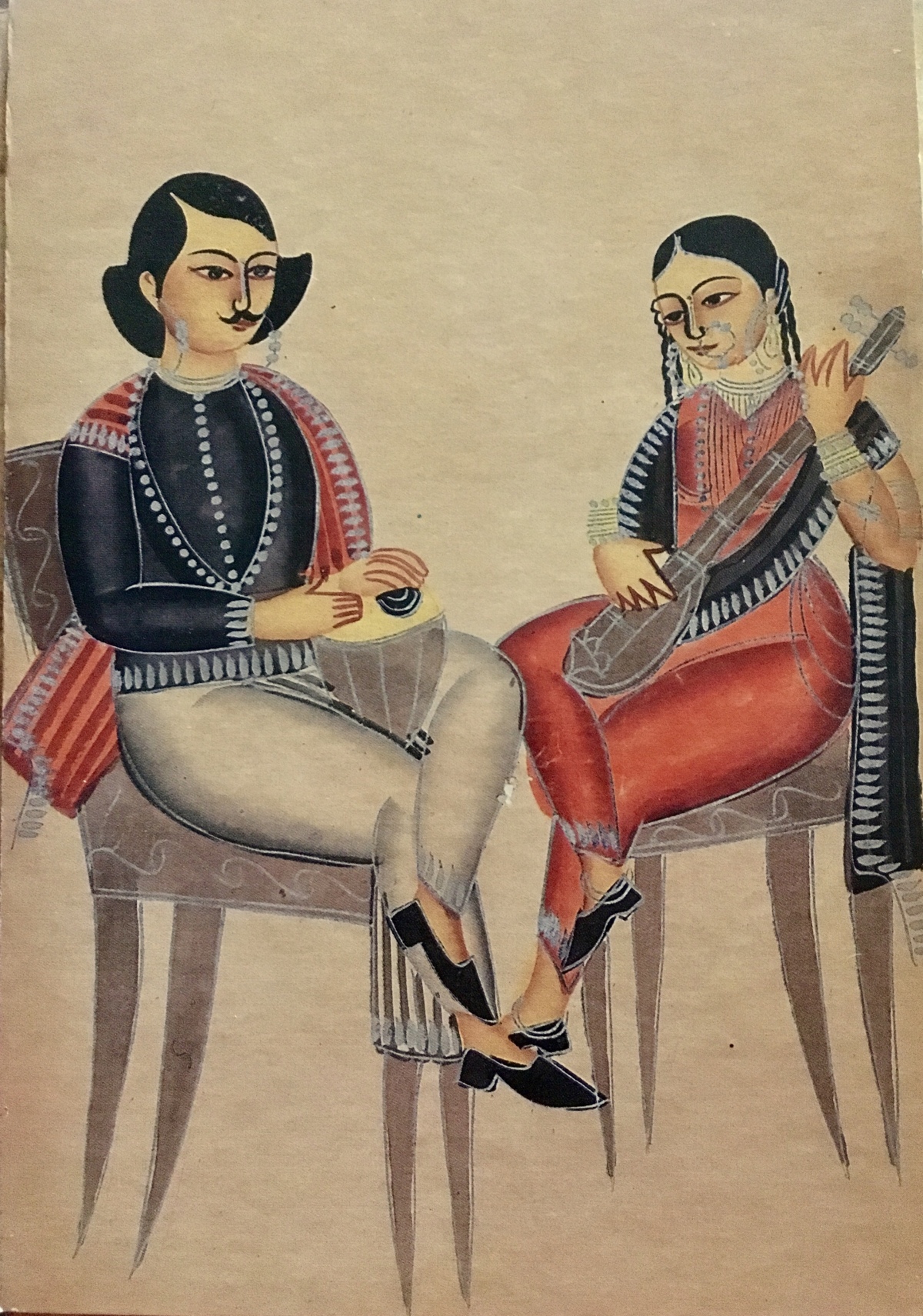 “Beauty lies in the eyes of the beholder” as Plato had once said and it holds true for Kalighat patachitra. With their lack of symmetry in human figures and sense of proportions, they often fail to impress the eyes of a realist. However, these paintings appeal to many art lovers with their bright colours, bold and vigorous strokes, and free flowing curves. It also occupies an important place in the history of Bengal and Indian art, as it forms a distinct line where the traditional pata or scroll painting took an urban form, while transcending the boundaries of religion and exploring into the contemporary socio-political realm. Thus, Kalighat patachitra is the first school of art in India that can be considered as truly modern.

Kalighat paintings, as evident from the name, originated in the vicinity of the famous Kali temple, which was founded in 1798 and is located on the bank of the Adi Ganga in southern part of Calcutta. This school of painting, which started sometime between the 19th century continued until early 20th century and included sketches and paintings created by artists referred to as the ‘Patuas.’

Historically the Kalighat paintings claim its lineage from the once popular narrative scroll paintings of rural Bengal.  Patuas, who were avid story tellers, moved from village to village with their painted patas and sang tales from the epics, various folklores, and the Puranas, to the largely illiterate farmers. The scrolls or patachitras which were hand painted, were long narratives that often stretched to more than 20 feet. Sometimes the paintings and narratives were made on scrolled clothes, and these were known as jorano patas. In a patachitra, each section was referred to as a pata. The travelling patuas would roll open the colourful patachitra scroll and would sing about one pata at a time.

Somewhere in the middle of 18th century, many of these patuas moved to Kolkata from the villages, especially from the Midnapur and 24 Paraganas areas, and settled around the Kalighat temple. Amidst this new setting the patuas soon realised that painting long narrative scrolls was not just tedious and time consuming but economically not feasible. The devotees that thronged the temple were looking for small, inexpensive paintings that were done quickly and could be carried back as souvenirs. Thus, to meet consumer demands, handmade papers were replaced with cheap, locally available mill papers; paintings were made affordable; and churned out in large numbers. Despite the influx of mill papers, the patuas continued with their tradition of  using natural dyes, made from different vegetables and plant extracts that were mixed with natural binding agents, such as, those made from bael fruits and tamarind seeds. The colours used along with the bold black strokes were mainly shades of red, yellow, blue, and white, while the jewellery was depicted using silver or tin, the later being a cheaper alternative, easily available, that also did not tarnish with time. The brushes used were also natural, made from easily available materials, such as squirrels’ fur, calf’s hair, and goat’s tail. Later with the coming in of water colours from England, the painters slowly adopted these synthetic paints, as they were easily available and proved to be more cost effective.

Kalighat paintings unlike other folk paintings of India show the human face in full frontal or three quarter views. Also interestingly, Kalighat patuas depicted enhanced glittering effects of jewellery in tin/silver or gold, which is seen only in Mughal and Rajput paintings. Another influence of Mughal art is seen in the large number of animal depictions by the Kalighat patuas. These artists did not follow any set rules of art but mirrored contemporary social life, thus giving us a wonderful insight into the religious and social life of Bengal during the 19th and early 20th centuries. These paintings were ultimately a product of that particular era, which skilfully amalgamated both the British style and Bengal techniques in their bold colours and strong lines that showed simple settings with minimum characters.

The Kalighat patachitra themes vary widely and the patuas of Kalighat did not separate art from life; and social hypocrisies, quirks, meanness, and follies, were all shown liberally through their paintings.  The early patachitras (early 19th century) focused mainly on religious topics, but in later part of the 19th century the themes turned more contemporary and depicted some famous social events, like the infamous Elokeshi-Mohanta affair, or the subsequent murder of Elokeshi by her husband known as the great Tarakeshwar scandal. Paintings also depict the then well known characters, such as, Rani of Jhansi, and the wrestler Shyamakanta fighting a tiger, and Bengali women on a balloon flying in the sky. Often humorous scenes are also depicted from the ‘Babu Bibi culture’ that show the changing Kolkata socio-cultural landscape under colonial influence. The popular religious themes of Kalighat patachitras were depictions of the Kali devi, devi Durga as Mahisasurmardini, Shiva in his various avatars, Vishnu in his different incarnations, tales from Ramayana and Mahabharata, and depictions of scenes from Krishna’s life, such as Krishna milking a cow, Kaliya daman, Krishna killing the demon Putana, Krishna with Radha, Krishna with Balarama, Krishna with Yashoda, among many more.

The Kalighat School of painting started dying out with the influx of cheap oleographs that reproduced the paintings. These cheap oleographs from Bombay and Germany blatantly copied the Kalighat patachitras, and flooded the markets with their machine made prints, ruthlessly killing the once flourishing Kalighat patachitras. The patuas with their strong sense of creativity and skills, failed to cope up with the rapid speed of the machines and decided to give up the art form. By 1930, the school of Kalighat patachitra completely died out, and whatever paintings were later found are now seen in prized art collections in various museums and private collections of connoisseurs.

Famous artists like Jamini Roy took inspiration from this art form that could truly be called as the product of rural renaissance. A school that has inspired satire in narrating social events while preserving an age old tradition of storytelling was hailed globally but has failed to achieve similar recognition on homefront. An exhibition of Kalighat patachitras was held in Prague as early as 1872 but in Kolkata only in the late 90s for it was labelled as bazaar art catering to gossip mills rather than a higher pursuit of excellence. As Shyamalkanti Chakravarty, Director of Indian Museum, once said “It’s time art lovers realised who the forebears of modern Indian art really were.”

(All photographs shown here are of prints in post card size, collected by the author over time. No original paintings have been shown here, and the pictures are for representational purposes only)

She can be reached here

2 thoughts on “Kalighat Patachitra – A Journey”