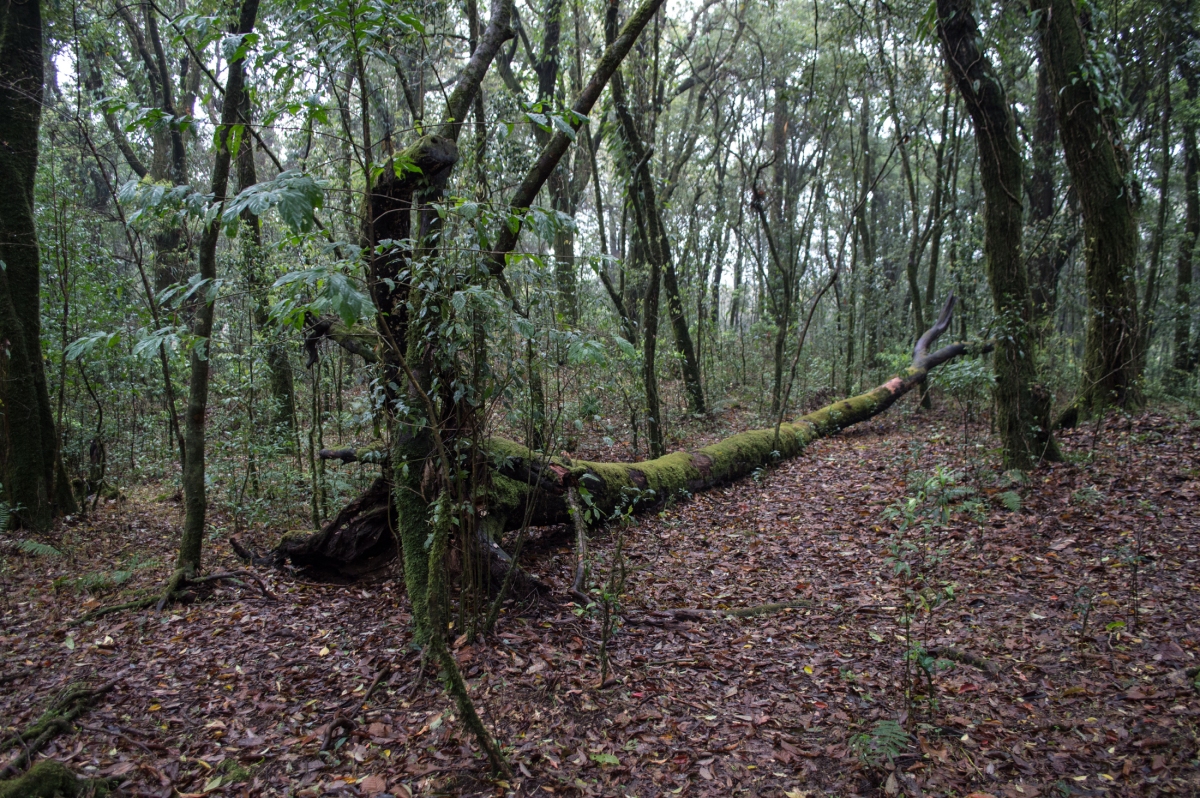 Its no secret that India’s northeast is treasure-trove of many fascinating places. Ranging from varied natural wonders, age old archeological remains, living cultural sites of various tribes to religious places of mythological importance, India’s incredible north-east has it all! While on my trip to Meghalaya, I got an opportunity to visit one such interesting place – the Mawphlang sacred forest or Lawkyntang in Khasi. It is approximately 27 kilometers away from the state capital – Shillong.  Local Khasi people of Meghalaya, although now converted to Christianity have always remained nature worshippers. An important aspect of Khasi culture is their reverence for sacred forests. These sacred forests have been preserved and nurtured by the Khasi tribals for ages through strict religious sanctions.

The road from Shillong to Mawphlang is quite scenic, winding its way through pretty hamlets along the road. After driving for about 40 minutes, the landscape dramatically changed, and I could see green hillocks all around covered with tiny green grass and a dense forest popping out from nowhere! The surrounding area is bereft of trees so this forest looks like an oasis in the grassy desert.

We took a local guide with us and entered the forest through a small entrance formed by the natural canopies of Rhododendron trees. Just at the entrance, there were a few menhirs; our guide quickly told us that the standing menhir signifies a male while a horizontal stone slab supported on small stones signifies a female.  He was quick to tell us about the ‘strict’ rules of sacred forest that scared us a bit. One can sit on the female menhir for some rest but no one can or should climb a male menhir; the person who dared do so would get elephantitis! Not sure whether he was joking, we reluctantly nodded and entered the forest.

What we saw at the entrance was just a trailer, as inside the forest there were an infinite number of menhirs and funerary mounds / Dolmens, housing relics of the long dead ancestors. Menhirs were often erected in the memory of the dead elderly people who were highly respected in the society for their knowledge. But one can also find other menhirs, smaller in size, perhaps used for sitting while performing ceremonies and some used as platforms for ritualistic animal sacrifices. Khasi tribals visit these on many occasions but especially before going to war.

Once inside the forest, we were flabbergasted by what we saw. Such a beautiful sight that it could compete with best of the Hollywood movie sets! We were surrounded by so many different kinds of trees and plants as if it was a live botany lab! The forest got denser as we went further. Owing to the density of the foliage, sunlight could hardly enter except filtered through the thickets of leaves and branches making the gloomy interior of the forest even more mysterious.

As we walked on the humus carpeted soft forest floor, our guide started giving us information and the scientific names of the plant species we were encountering along our path. Many species of parasitic Orchids, Rhododendrons, and mushrooms of various types could be spotted in abundance all around us. Other plant species that are common in the forest are Rhus Chinensis (Chinese Sumac or Nutgall), Schima Wallichi (Needlewood tree), Lithocarpus dealbatus, Engelher diaspicata (introduced by our guide as butterfly plant as when ruffled, its dried leaves appear like flying butterflies), Myrica Esculenta (box myrtle or Bayberry) and various Lichens. However the star attraction in the forest is the Castanopsis Kurzii trees as well as Khasi pine trees that form the dense canopy and also acts as a host to parasites like orchids, ferns, mushrooms, pipers, climbers and variety of mosses. 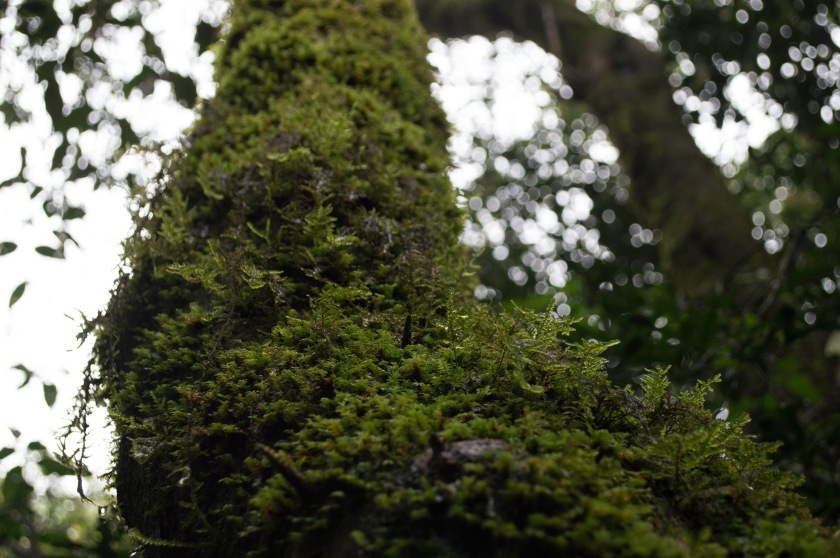 There are so many unusual things in the forest fallen all around that we were tempted to pick them up and take them back as souvenirs especially the seeds of Elaeocarpus Ganitrus or as we know them commonly; Rudraksh. Why not- anyway it is just lying around; I thought. But our guide warned me not to take anything that belongs here outside the forest as these forests are protected by spirits locally called as U Ryngkew U Basa. These are believed to be sent by the Gods to protect the forest from human abuse. To convince me, the guide narrated a past incident when the army officers tried to take out wooden logs from the forest. But the truck carrying the logs refused to move from its place until the logs were unloaded and put back into the forest.

Carrying any of the forests’ belongings outside is believed to anger the Gods and the protective spirit here, which results in a poisonous snake being spotted by miscreant resulting in injury or death. Good behavior and no ill intentions while entering the forest is rewarded by being protected by a tiger or a leopard! Call me superstitious or whatever but not wanting to hurt their sentiments I dropped everything I had collected before leaving the forest. Thank God our guide at least allowed me to take the pictures I had clicked inside in my camera to be taken outside. Jokes apart, I have never seen something this awesome in my life before. I strongly suggest everyone to come here and visit this stunning biological museum of the Khasis whenever you make it to Meghalaya. 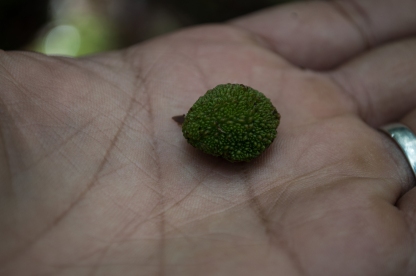 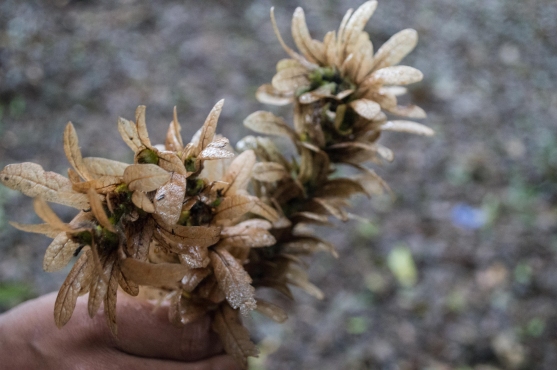 It is heartening  how nature holds utmost importance in Khasi culture and despite modernization and rampant abuse of nature elsewhere, these forests remain protected by men for whatever reasons. The way these beliefs are deeply embedded in the minds of the people truly speaks how constructive religious sanctions can be at times resulting in the continual development of a responsible society. Some traditions are worth keeping and following

How to reach: Hiring a taxi from Shillong (27 kilometers) to reach Mawphlang is the easiest way to reach. Shillong is less than 2 hours by road from Guwahati – the biggest city in Northeast with regular domestic flights to all major cities in India.

Where to stay: Although staying in Shillong is the most convenient option, a more adventurous traveller can opt to stay in the traditional Khasi huts constructed in Mawphlang village. Adventurous for the reason considering its remote location overlooking a valley, electricity is often a luxury here with not even small shops anywhere closeby!

He can be reached at onkaar7@gmail.com

One thought on “Mawphlang Sacred Forest – A Photo Story”