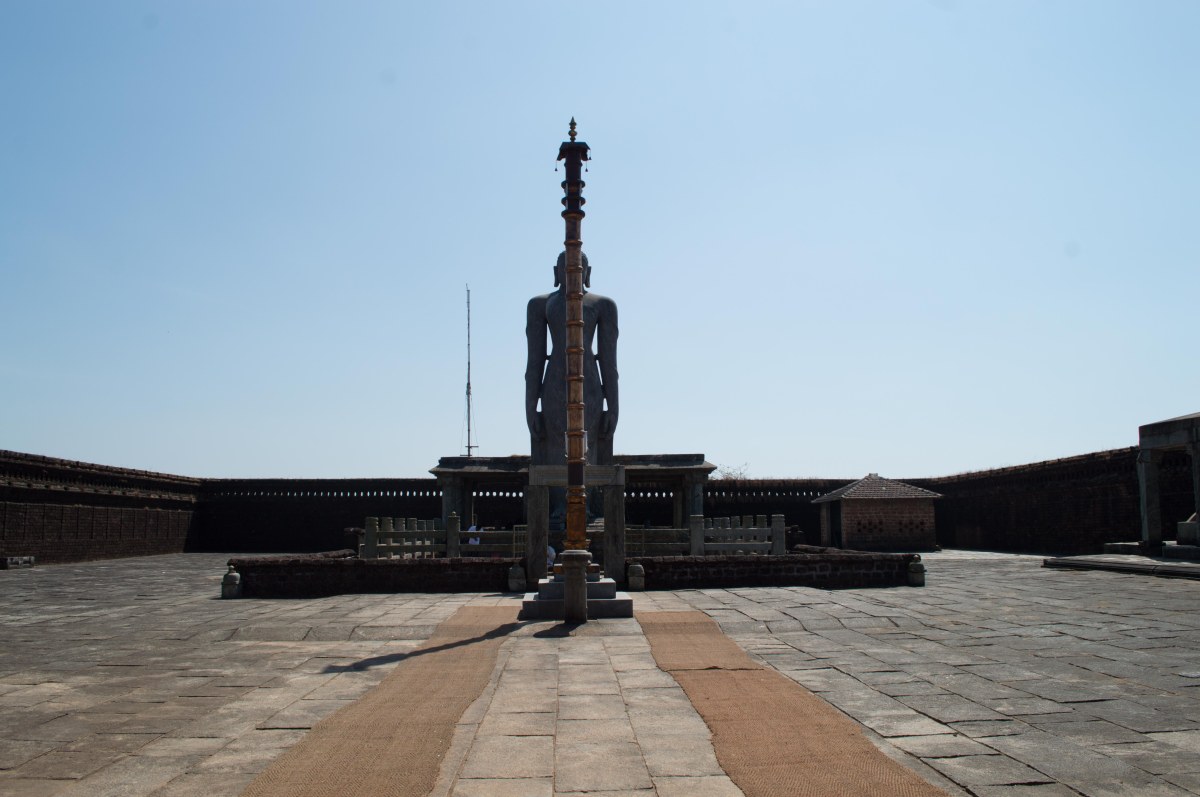 On a full moon night of Kartik month, Chandragupta Maurya saw 16 dreams that left him disturbed and he sought the advice of his spiritual teacher, Acharya Bhadrabahu. The Acharya was the last Shruta Kevalin (all knowing by hearsay) of Jainism before it split into two sects. In one of the 16 dreams, Chandragupta saw a twelve-headed serpent approaching which the Acharya interpreted as the approaching of a 12 year long period of famine and death. Worried about the survival of his Sangha monks, Acharya Bhadrabahu along with Chandragupta left for land south of Vindhyas. On reaching Chandragiri hill in Karnataka, Bhadrabahu felt his end was near so he undertook Sallekhana (Jain ritual of fasting unto death) instructing his disciples to spread the religion. This was 3rd century BCE and the monks traveled in different directions making Karnataka an important Jaina stronghold.

Jainism in Karnataka flourished under various dynasties and a high concentration of Jaina monuments including shrines called Basadis and large Gommata statues are found in the state. Recently, on a trip to Mangalore, I decided to go on a day trip to the medieval Jain center of Karkala in Udupi district.

Although the exact source of how the name ‘Karkala’ came into being is unknown, the most probable answer lies in its geology, as the area is abundant in black flint rocks i.e. Kari Kala which later became Karkala.

The history of Karkala dates back to 1st century CE when Pandyan kings ruled Tulunadu from their capital Barkur. As per “Aliya Kattu”, the law of inheritance of Tulunadu, the next-in-line to the throne is the king’s nephew (sister’s son) and not his own son. Following the tradition, Bhutala Pandya came to rule Tulunadu. In due course, the throne passed to King Vidyumna Pandya who was reluctant to let the throne go to his nephew and instead divided his kingdom into twelve parts – each for his twelve sons. He installed his seven sons as “Hegdes” of Kapu, Ermala, Mudradi, Kantavara, Kapittu, Panambur and Kuthethur, three sons as “Odeyars” of Padubidre, Ernadu and Katpady, and two of them as “Ballals” of Kulur and Irvathur. Of the above, Kapittu in particular is directly related to the history of Karkala.

Kapittu Hedge was drunk on his power and often troubled the people of his dominion. These worried people approached the powerful king of Hombuchapura for help. Seeing that the Kapittu Hegde continued to ignore his kind advices, the enraged king of Hombuchapura attacked and defeated the army of Kapittu Hedge and thus Karkala came under the Hombucha kingdom. Various edicts found around Karkala speak of the region being under Kadamba, Chalukya and Alupa kings in the past. It is said that the ‘Santarasas’ of Hombucha had matrimonial relations with the Alupas of Mangalore. The Santarasas of Hombucha established their rule in Tulunadu after the fall of Alupas around 11th century CE. The direct rule of Bhairava Pandyas (They were called so due to their strong belief in Bhairava Padmavatidevi) over Karkala started somewhere between the end of 12th century CE and the start of 13th century CE. Karkala became a glorious and prosperous city during this time and it could be termed as its golden period.

Along with being a metropolis of those times, having separate residential colonies for each class, schools for music and painting, gymnasia, military schools and large trade centres, Karkala made unforgettable impression in the field of sculpture and architecture as well. Karkala has a total of 18 big and small basadis and a world famous monolithic idol of Bahubali. Out of the 18 basadis, Neminatha basadi at Hiriyangady, Chaturmukha basadi, Shravana basadi and Kere basadi are architecturally more important as these were built under royal patronage. The biggest advantage of Karkala is that the Nellikaru (a variety of granite) rock, perfect for stone sculpture and architecture is found in abundance here.

The most important landmark of Karkala is the Gomateshwara monolith statue that was installed by King Vira Pandya. He was a philosopher and influenced by the teachings of Muni Kalyanakeerti. The King believed that spreading his compassionate religion in the world is the truest way to attain good life after death. Accordingly, he took up the task to install the idol of Gomateshwara after consulting his Guru Lalitakeerti Acharya Mahaswami. A 41.5 feet monolithic statue was carved out by hundreds of sculptors within a year. The piece of rock out of which the statue was carved, was driven uphill on a wagon with 20 wheels with the help of several elephants and countless workers and heaving of pulleys and ropes. The statue was carved from the rock under the shade of a pandal (cloth canopy). Happy with the outcome, the king honored the sculptors with gold.

An auspicious muhurat was fixed by the astrologer and invitations were sent in all the directions. The statue was installed on the hill of Karkala on 13th of February in 1432 CE in front of guests of honor including King Deva Raya II of Vijayanagara Empire. King Vira Pandya’s fame spread in all the directions after the grand ceremony! He also installed a beautiful Brahma stambha in front of the statue later in 1436 CE. 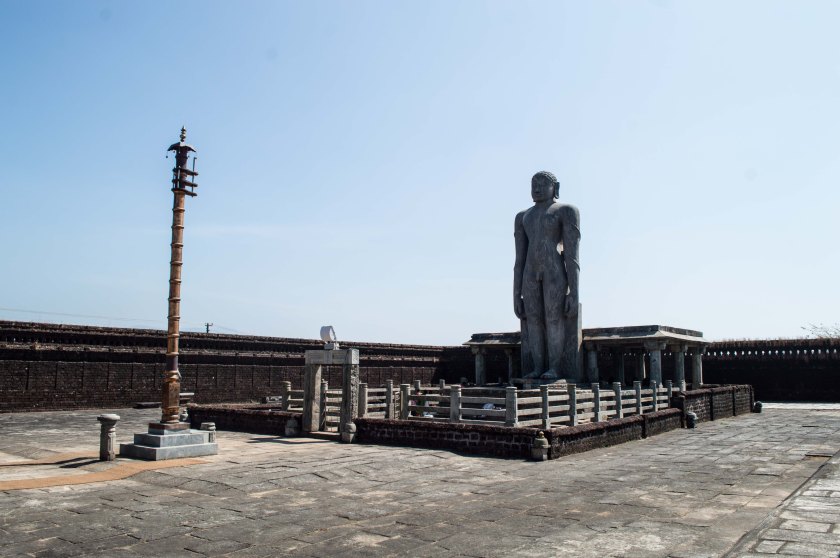 Kere Basadi is called so due to being situated in middle of a pond (kere) was built by Pandyappodeya VI in 1545. This Basadi too like most other in Karkala is a Chaturkukha Basadi. On the four sides, it has idols of Mahaveera, Adinatha, Chandranatha and Shantinatha. Although I could not make it to the basadi, heard that the pond has now shrunk and an approach road has been made whereas in earlier times, the pond was much bigger and the basadi was accessible only by a boat.

Chaturmukha Basadi is probably the most important and also the most visited of all. This basadi situated at Karishila Betta opposite Gomata Betta was built in 1586 CE by King Bhairavendra II. Being Chaturmukha, it has one life sized idol represented in three fold, making it a total of 12 idols. It has 40 pillars inside and 68 outside making it a total of 108 pillars. It is said that, the king had a very ambitious plan to build a 3 storeyed basadi and then build a connecting bridge to Gomatabetta. The 100+ pillars were built to support the ground floor structure. However, the king died as soon as the ground floor was completed and the rest of the plan was abandoned. One can have a clear view of the upper half of Gomata Betta from this Basadi. 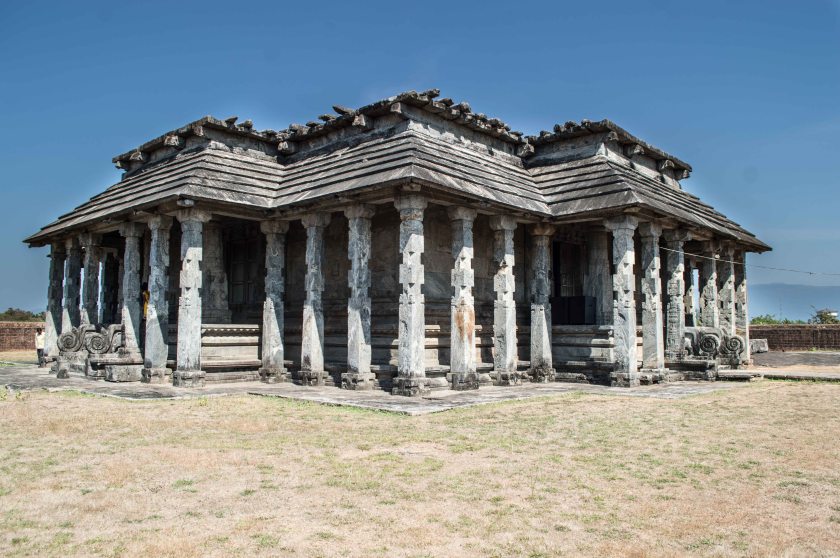 Some other places of heritage in and around Karkala include the Neminathaswamy Basadi, the 15th century Venkataramana Temple, Shri Mahalingeshwara temple, Anantashayana Vishnu temple which was originally built as Anantanatha Jain basadi, Kalikamba temple, Karkala Jamiya masjid built during Tipu Sultan’s reign and the 300 year old Atthur church.

How to reach: Closest major railway stations are Udupi (38 kms) and Mangalore Junction (50 kms). By road, it is most convenient to hire a cab from these two places to Karkala for a day trip.

Best time to visit Karkala: It is warm in Karkala throughout the year but December to February is a rather pleasant time.

He can be reached at onkaar7@gmail.com