Cities represent mini civilizations. If civilizations are part of the evolutionary chronicles of human settlements, cities in the miniature format represent a broad canvas, on which the civilization and its cultural effects are painted in the form of historical structures, monuments and the other remains of these vestiges, which, ultimately gives the prototype signature to the entire gamut of architectural legacy and decorating the expert craftsmen’s dedication to build the historic structures dotting around the city landscape. 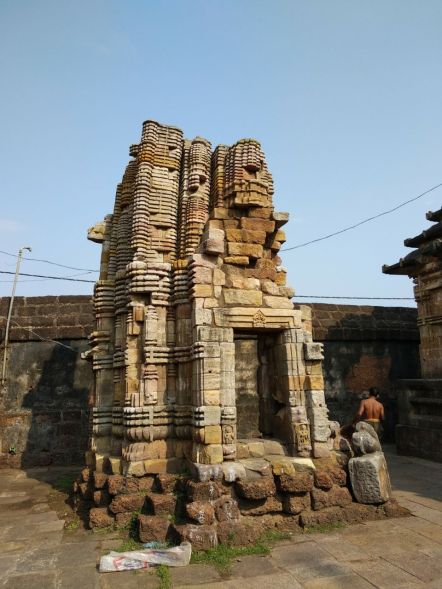 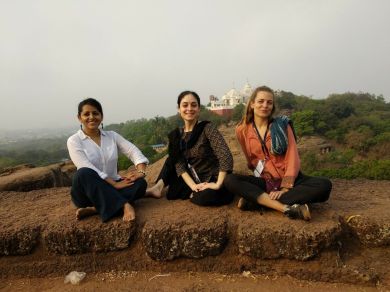 With temples being its signature monuments and the Kalingan architecture forming the epitome of the unique temple building style, Bhubaneswar stands tall as perhaps the most densely populated city of temples with national and state importance, making them 361, here.

However, the city of more than 7,000 temples in the past never got noticed for all its precious monumental jewels excepting a few major heritage sites. There was always a need to promote the city’s rich heritage and cultural traditions showcasing its colourful festivals and temple-based rituals so that visitors from around the world would take note and start orienting their tour plans towards the Temple City Bhubaneswar _ tranquil, historic and Smart. 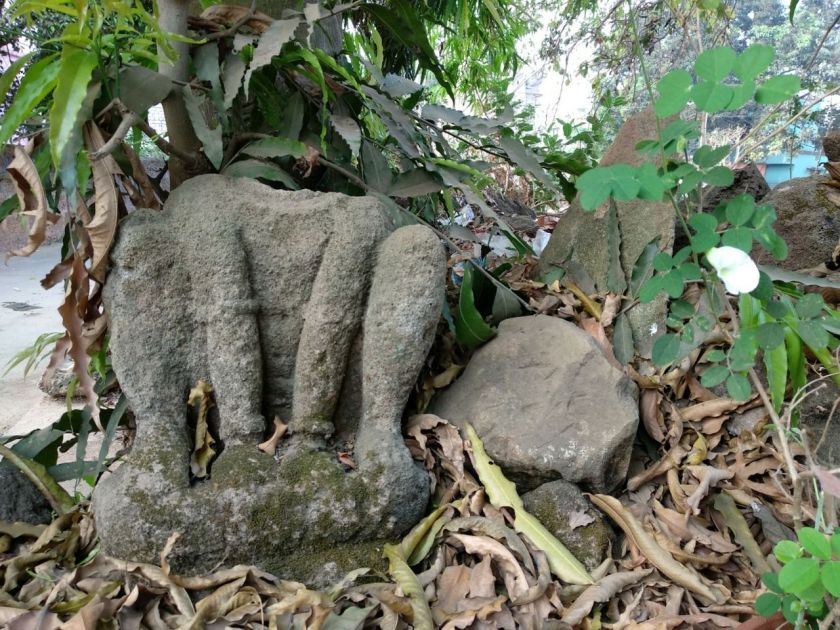 While the genesis of the city from the Mauryan era Sisupalgarh to the modern Capital city of new Odisha in 1948, and winning the coveted Smart City Challenge in 2016, (Best proposal for a child-friendly city) could be an indication, heritage in the city was always taking a backseat, years ago.

Despite having so many monuments, including many protected by the Archaeological Survey of India (ASI), the city’s projection with its priceless monuments along with its urban development and the latters side-effects never made headlines.

Putting all things to a rest, the Bhubaneswar Municipal Corporation, Bhubaneswar Development Authority and Odisha Tourism took a bold and dynamic step on December 18, 2016 to launch the city’s first guided heritage tour in the city known for its majestic temples, intricate carvings, alluring damsels and fierce forms of Goddesses in the form of Sapta Matrikas or Seven Mother Goddesses. 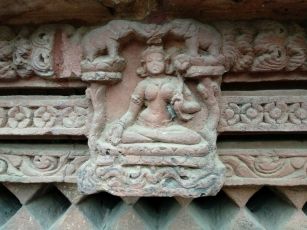 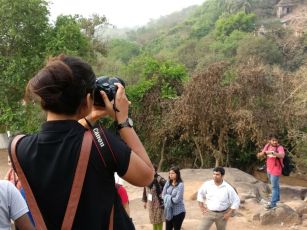 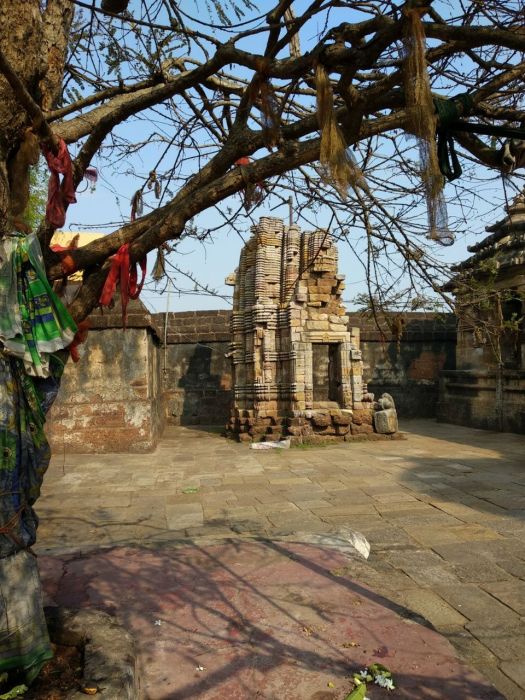 The heritage walk was conceived from the very idea to make the city a happening place on the world heritage map and moreover, branding it with explorable avenues so that the visitors would be always willing to participate and rediscover the city. The opening up of the skies through the international flight services also added to the fun as many travellers are coming from the ASEAN nations and loving discovering the city in an old and charming way.

The name Ekamra Walks was coined deriving from the old name Ekamra Kshetra as the city was always known from the beginning of the temple building era of 7th Century CE or even earlier. Adding 10 major monuments to the list, a live demonstration at the dance institution Art Vision by Odissi Guru Padma Shri Ileana Citaristi, a visit to Bindusagar, Doodhwala Dharamsala and medicinal plant garden Ekamra Van.  It was also planned to have the event non-stop every Sunday starting from the 10th Century Mukteswar Temples, which has got a beautiful arch representing the beauty and precision of Kalingan sculptural art.

Ekamra Walks Old Town Circuit starts from the precinct of Mukteswar Temple every Sunday at 6.30 am. There is a “jugalbandi’’ of heritage and music there, as the visitors are offered a nice dose of Odissi and Hindustani Classical music amidst the chirping of birds as the nearby lawn and trees are frequented by the winged guests and locals use the lawn for their morning exercises and  walks. After Mukteswar, visitors watch the sun dial and then proceed towards Parasurameswar temple through the lawn. The temple is one of the best preserved monuments dating back to 7th Century CE in Bhubaneswar.

After visiting Parasurameswar, the walkers pass through a narrow passage called Kotirtheswar Lane, named after the 15th /16th Century Kotirtheswar Temple. However, during the journey through the lane, Swarnajaleswar temple makes for a nice peep. The Kotitirtheswar Lane leads to the Eastern banks of holy lake, Bindusagar. After seeing the lake from the Parikrama on its Eastern bank, they move towards Ananta Vasudev temple, which perhaps is the only Vishnu Temple in the Ekamra Kshetra and visitors also see the temple kitchen, which perhaps is the second oldest after the  Jagannath Temple in Puri. After Ananta Vasudev temple, the next stop is Doodhwala Dharamsala, a heritage structure for budget pilgrims. Then after climbing the Curzon Mandap to view the majestic Lingaraj, it’s the beautiful  Chitrakarini and Sari Deula to showcase the restoration after excavation, Mohini on the bank of Bindu Sagar, Parikrama around Bindusagar, Vaital Temple near Tini Mundia Square, the visitors soak in the Odissi recital by beautiful young dancers at Art Vision, an institute run by Italy-born Padma Shri Ileana Citaristi.

The Monks, Caves and  Kings, at Khandagiri-Udayagiri, on the other hand, starts at 6.30 am on Saturday at Udayagiri caves and goes through Rani Gumpha (ground and first floor), Ganesh Gumpha, Udayagiri Hilltop, Bagha (Tiger) Gumpha and Hati (Elephant) Gumpha. Inscription in Hati Gumpha, rock art and inscriptions at Bagha Gumpha and Manchapuri Gumphas are worth mentioning. After the Udayagiri trail, the visit to the relief images of Jaina Tirthankars at Khandagiri is a delightful journey, only to end the trail in the Twin Hills. 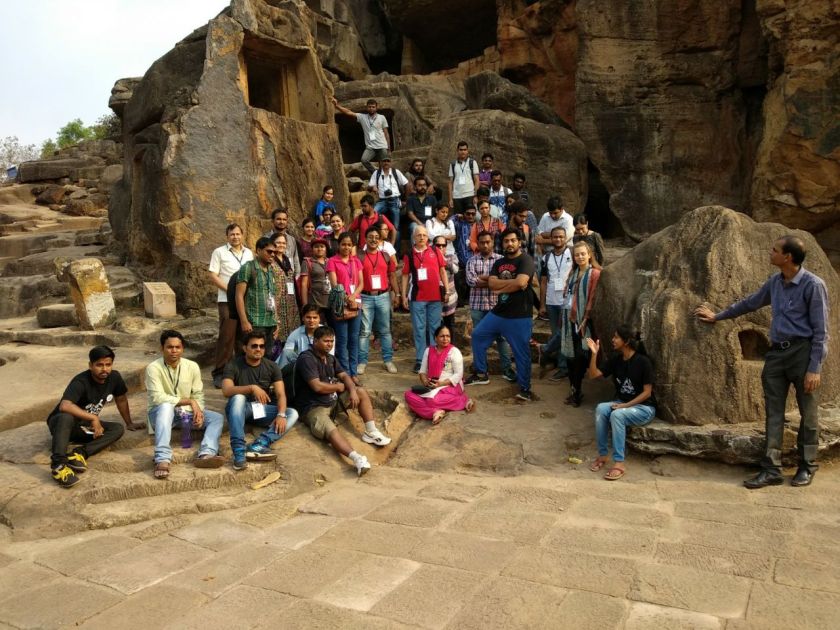 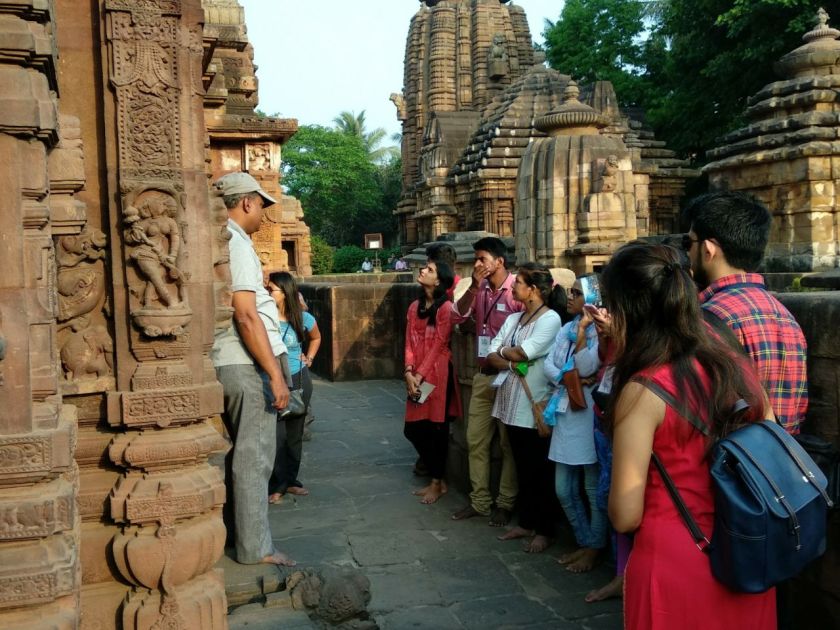 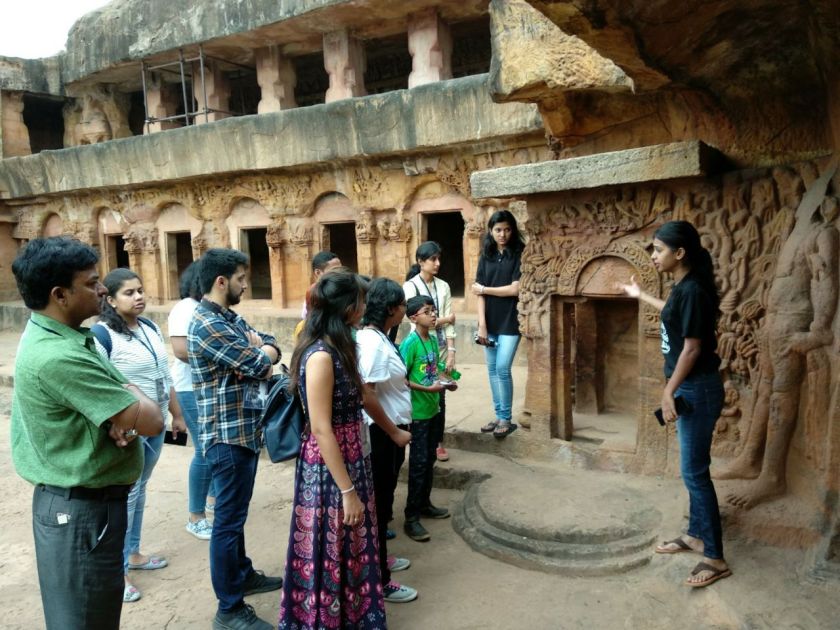 Bhubaneswar has all the potential to become a World Heritage City as it harbours timeless vistas and monuments but there was no way to make the visitors understand the dynamics of historic evolution and Ekamra Walks was perhaps the best way to carry forward such an agenda.

The pre-historic cave art, nature and man-made caves, monuments depicting the influences of three major religions originating from the Indian sub-continent, handicrafts from stone with mesmerising details and life-like portrayal with magical craftsmanship, unique architectural patterns and forms of Kalingan temples are there to invite the guests to immerse themselves in the all-new experience .

Just after finishing the heritage walk at Ekamra Van on the western bank of the holy Bindusagar lake, Mayor of Cupertino Mrs Savita Vaidhyanathan had said that her IT City would  have a medicinal plant garden like that of Ekamra Van here. She appreciated the fact that even after embracing modernity and all the new-age development in the Capital city, the Old Bhubaneswar city has kept its unique characteristics and for the participants of Ekamra Walks discovering these uniqueness is a beautiful thing to be associated with.

Best-selling Marathi author, poet, critic and linguistics scholar of repute Balchandra Vanaji Nemade,  who was a recipient of the coveted Jnanapitha Award in 2014 for his novel “Hindu: Jagnya Samruddha Adgal’’ and also a recipient of the Central Sahitya Akademi Award and Padmashri, was a guest of Ekamra Walks, Old Town Circuit.

The famous author, who has taught comparative literature in India and abroad and also a frequent visitor to Odisha, said “Odisha has a treasure which is unique in its own way. People are gradually discovering it and those in the Western world and Indian metros should come to explore the poetry written on stone by the craftsmen from Utkala.’’

Senior Editor NDTV Hindi Ravish Kumar, was delighted to see the treasure of artistic monuments in the Old Town area of the Ekamra Kshetra and said “every temple here is like a big volume of artistic book written and carved through the efficient carvings and poetic expressions with all detailing and imagination.’’

Suggesting that the storey-telling style of the guides must be on interesting anecdotes and not just chronicling historic facts, the senior journalist also added that if the city could have information boards on the monuments in public places or parks, then more people and especially kids would show more interest in these historic monuments. 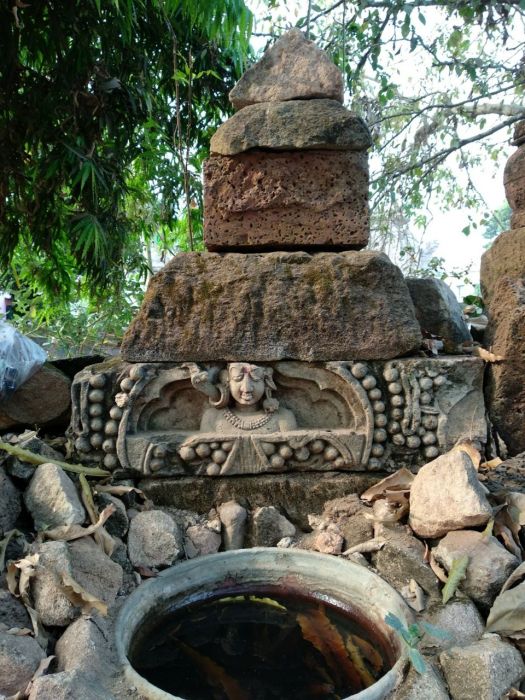 From little know to a sought-after weekly heritage walk, Sunday in Old Town and on Saturday at the Twin Hills of Khandagiri and Udayagiri, a well-known Jain heritage site with beautiful pre-historic and man-made caves, several inscriptions with potential to influence the socio-political equations of the-then India and Odisha in particular, engineering knowledge used in that period for better drainage and ventilation in the caves and cave art of various motifs the regularity of the event and constant presence, especially in print and social media has made Ekamra Walks a success story with a follow-up by more than 550 newspaper and webpage articles (for Old Town and Monks, Caves and Kings at Udayagiri-Khandagiri) and more than 6,500 Face Book page likes and followers of around that number, in FB.

The success of Ekamra Walks would also help in the development of the start-up ecosystem in tourism, travel and guiding sector as the heritage trail has proven its worth in the City of Temple. Several other start-ups have also started their ground work and some even gone to the extent of conducting pilot tours and packages in and around the city with themes like heritage, wildlife, rural nature trail. The heritage tour might be just a small step towards showcasing the monumental treasure of the Temple City, but it would be a giant step to provide an ample kick to the latent potential of the tourism sector as the region is not only bestowed with sites to be explored, but with beautiful handicrafts and souvenir items to go back home with fond memories.

Ekamra Walks, thus, has kindled the hope on the heritage front and it would certainly light up others in the fray, for a great socio-economic uplift and progress. Bhubaneswar would certainly have more presence in heritage and tourism sectors.

Writer, journalist, amateur photographer and currently working as Communication Consultant to the Bhubaneswar Smart City Ltd. He can be contacted at bibhutibarik@gmail.com