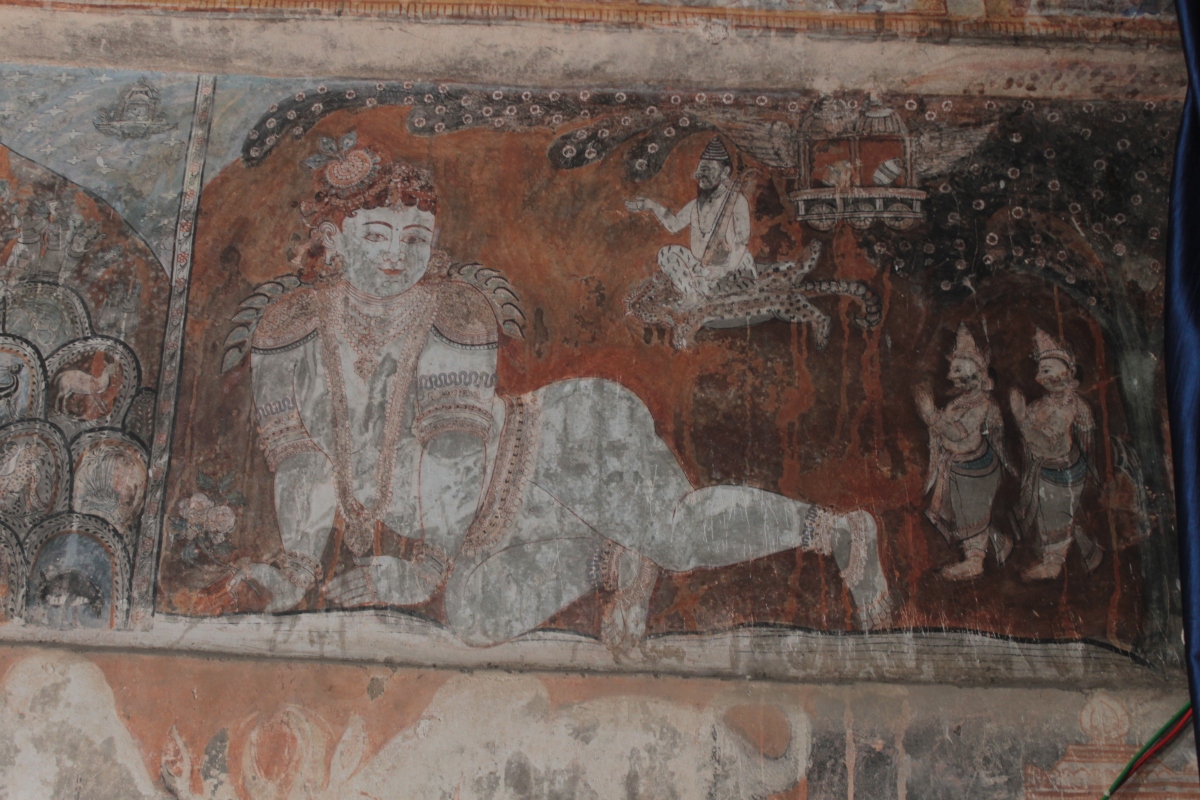 Puri, the abode of Lord Jagannath is widely celebrated as a supreme Hindu Tirtha for its legendary Jagannath cult. Everyday Puri is visited by thousands of devotees from all over India for darshan of the Hindu Trinity at Jagannath Temple.

The present Jagannath Temple may be a 12th-century structure testifying the highest achievement of Kalinga School Architecture, but the celebration of Puri or Srikshetra as a Hindu Tirtha goes back to much earlier time. For example, Gobardhana Matha located in Swarga Dwara had been founded by Adi Sankaracharya in 8th Century CE as a centre of learning and culture. From then on mathas or monasteries have been playing an important role in performing seva or duty for Lord Jagannath. There are a large number of mathas belonging to different sects located around Jagannath Temple. Mahantas head these monastic institutions, who are also the spiritual preceptors of many followers of the sect. These mathas are treated as social infrastructure located within historic residential neighbourhoods or shais where monks, austerities, bhikkhus and devotees stay to practice meditation for spiritual growth.

The Mahanta of Bada Odia Matha

Once covered with murals profusely with time there are only two monasteries left where one can trace the evolution of Puri paintings although in highly faded condition.

Puri is a well-known pilgrimage site for Hindus and celebrated as one of the four supreme dhams. The holy city of Lord Jagannath is well connected by rail and road and forms part of the golden triangle in Odisha for tourists world over, the other two places in the triangle are Konark and Bhubaneswar. The nearest international airport is located in Bhubaneswar, 65 km away. Puri abounds in sites for both spiritual and adventure seeking souls. Every street of Puri and its surrounding villages has something to offer whether it is food, craft, ethnic life, devotion or spirituality. Its sea beach is one of the most celebrated beaches of India on the Bay of Bengal and a drive through the Puri – Konark marine drive is one of the most memorable experiences for a traveller.

Puri is full of hotels and restaurants to suit all budgets. While at Puri don’t forget to eat mahaprasada, the food offering to Lord Jagannath on a daily basis.

The Bada Odia Matha has the largest concentration of Puri paintings on its walls drawn in the 19th century. This matha was established by Atibadi Jagannath Das in the 15th Century CE. He was a great religious poet and composed the Odia Bhagwat. The image of Atibadi Jagannath Das is preserved in the matha. Jagannath was the intimate disciple of Sri Chaitanya Mahaprabhu and founder of Atibadi sect of Vaishnavism. The Odia Matha makes arrangement for pankti bhoga in the Jagamohana during Rukminiharana festival and supplies kala sari (black cloth) to Goddess Vimala. It is also vested with the duty of cleaning the Ratnavedi and supplying of canopy for the inner sanctuary and the pillows for the Lord. The matha provides trimundi chandua and silk cloths for chaka apasara, til oil for phooluri neeti, oil and ghee for Deva Deepavali.

Inside of the Monastery profusely painted with murals 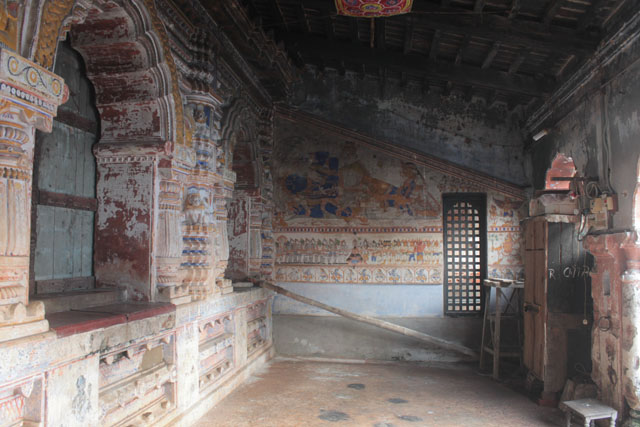 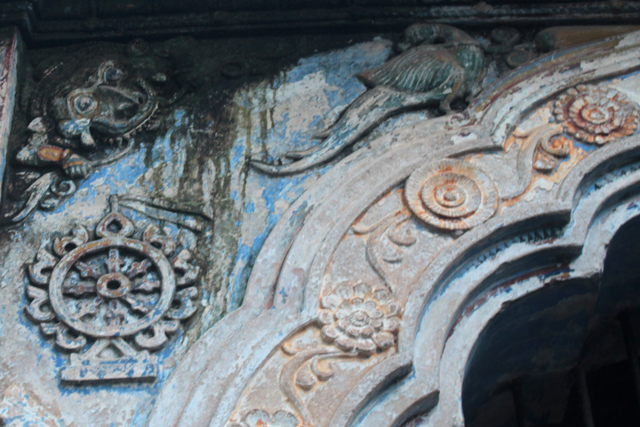 More than life-size murals of Lord Vishnu, Krishna and Rama with their consorts and allies, the matha boasts some of the finest religious art of the region. As one enters the inner monastery gate the first sight is the murals of Lord Jagannath, his elder brother Balabhadra and Devi Subhadra.

Next, are scenes from Krishna Leela and the Ramayana. 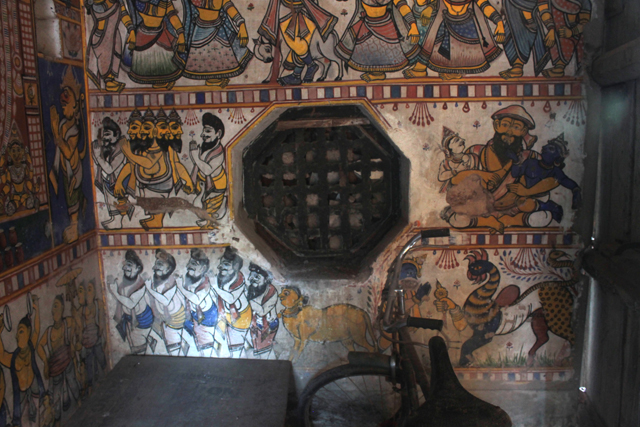 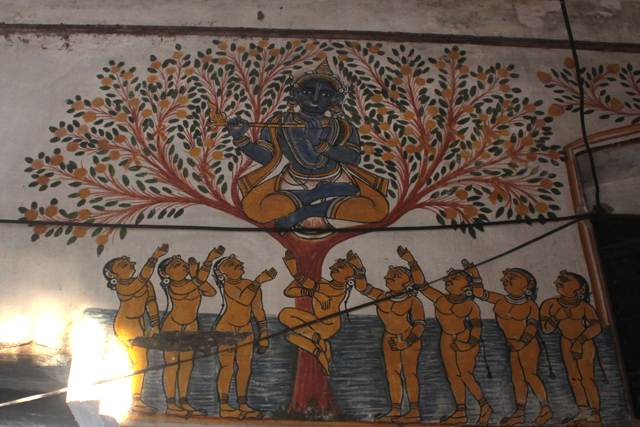 The depiction of Anantasayi Vishnu is yet another major draw among the murals of the matha. 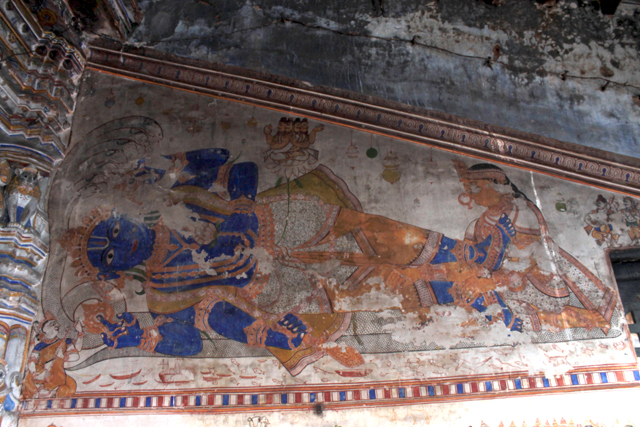 One also finds the episode of Samudra Manthan or the Churning of the Ocean in the monastic wall.

Among the decorative figures, the images of peacocks are eye-catching. 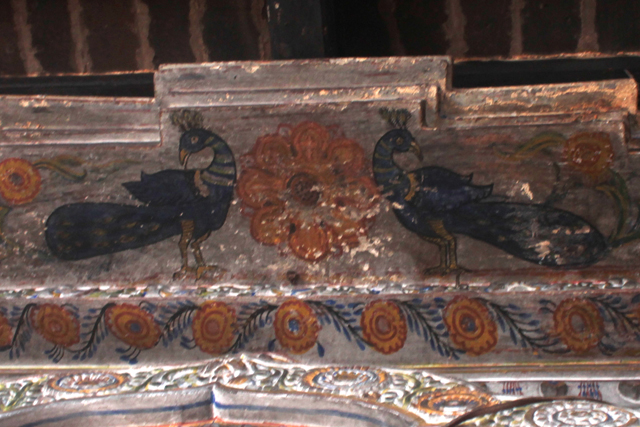 The Kaliya Dahana scene of Krishna is yet another important mural of this monastery. 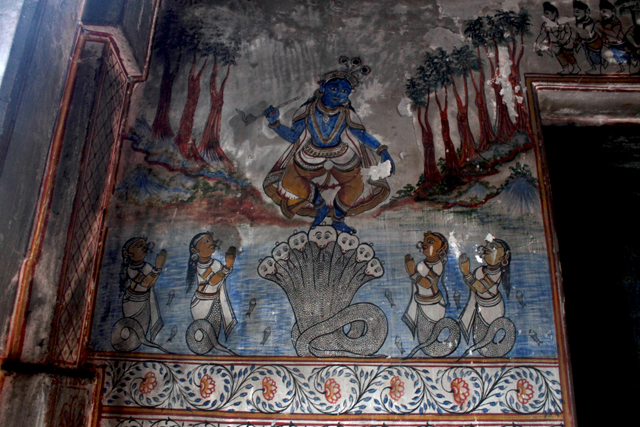 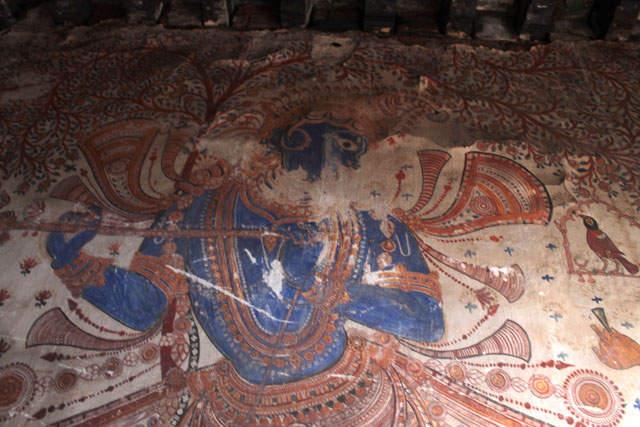 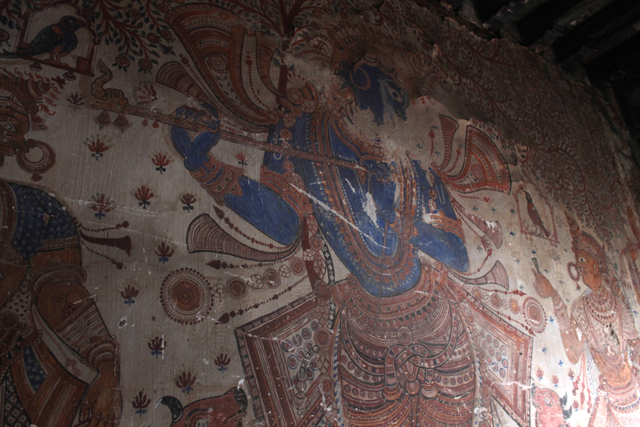 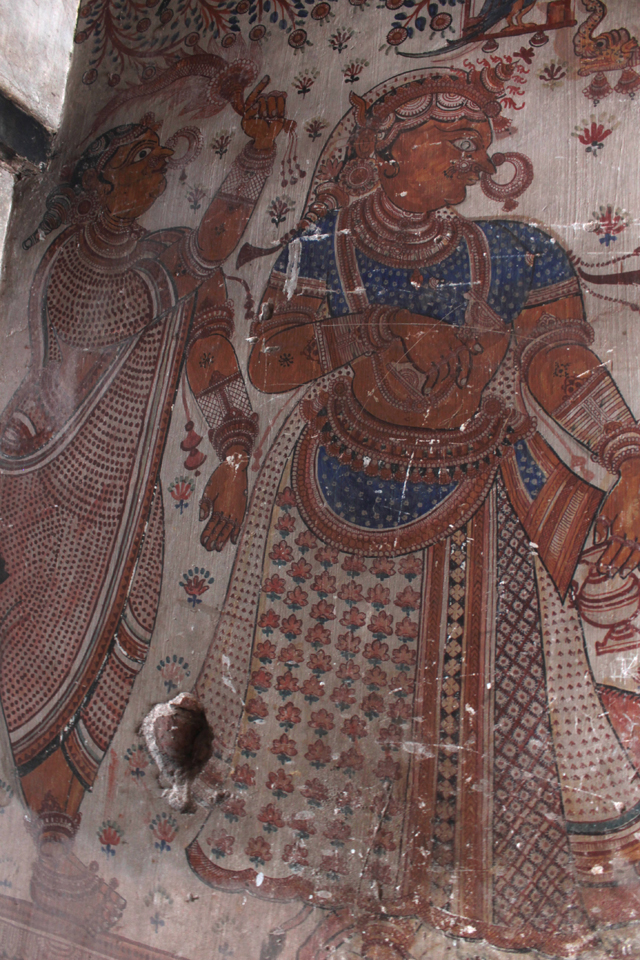 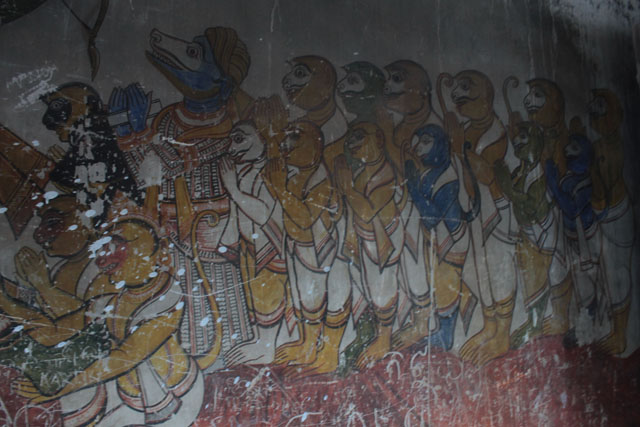 Scenes from the Ramayana

However, sadly most of the murals are on the verge of extinction. The monastery is neither on the heritage trail.

Gangamata Matha located in Bali Sahi is yet another monastery where one can see traces of Puri murals of the 19th century. Belonging to Gaudiya Sect, the matha is located beside the sacred Swetaganga Tank. 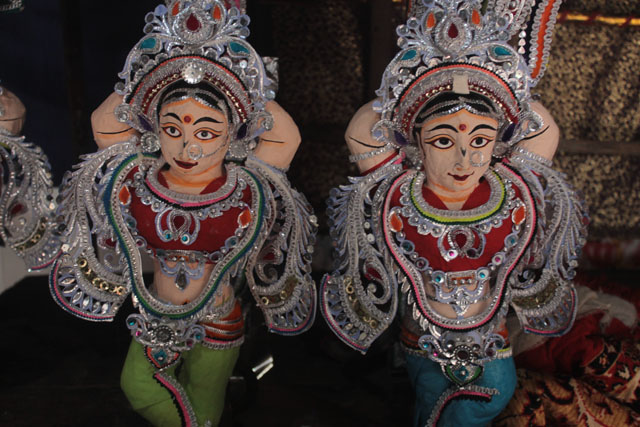 Like Bada Odia Matha here also one finds life-size murals of the Hindu Trinity (Jagannath, Balabhadra and Subhadra) at its entrance. 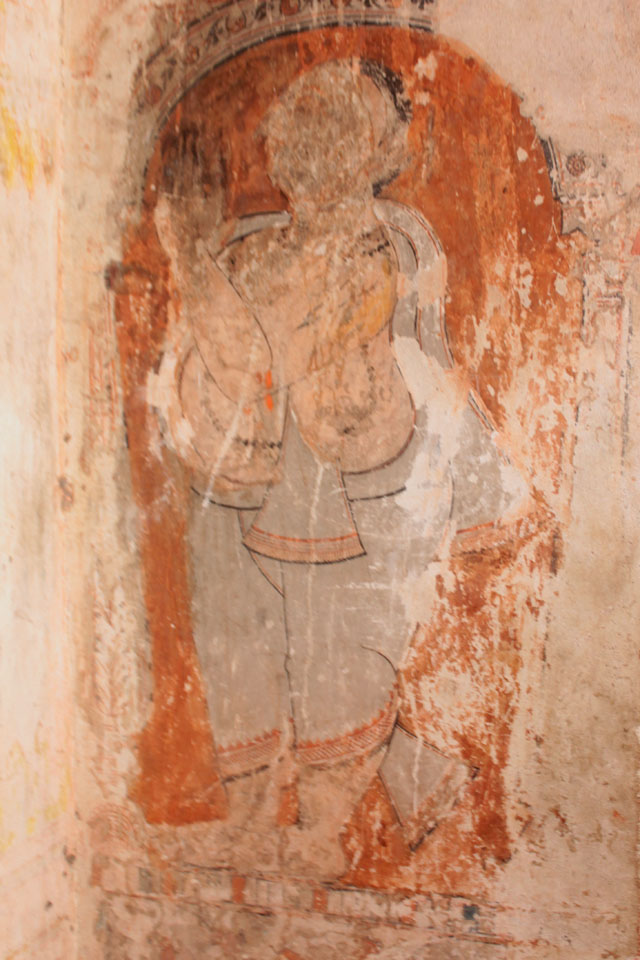 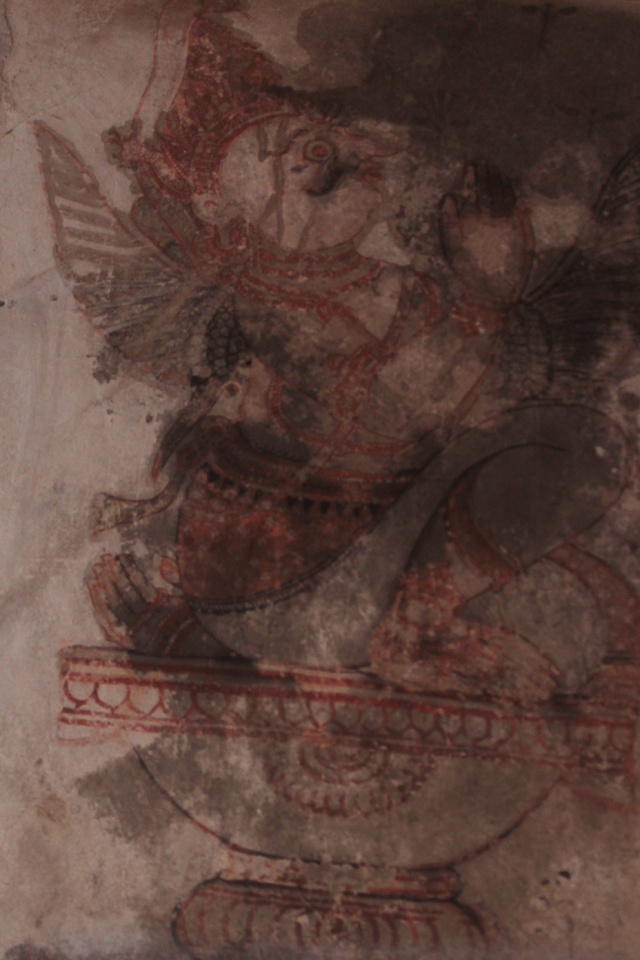 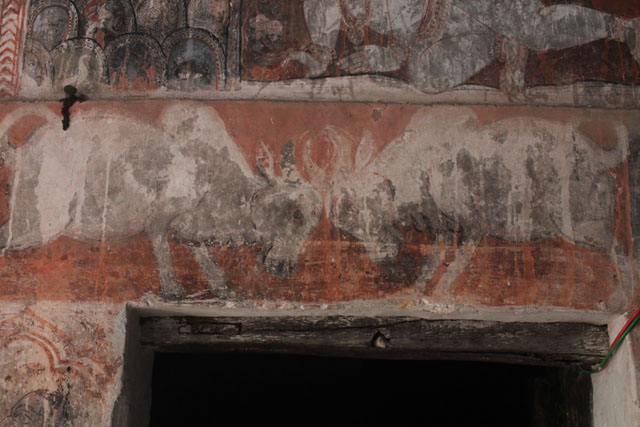 In the next panel, the mural boasts child Krishna along with the depiction of forest environment. There are also depictions from the scenes of the Ramayana and the Mahabharata.

One of the Finest Wooden Panels at Gangamata Matha

In Indian mural tradition, Odisha played an important role as a link between south and north. However, unlike other mural traditions, such as Vijayanagara, Cholas and Nayakas of South and Orchha and Bundi of Rajput north, the Puri paintings have hardly drawn attention. One of the major concerns is their preservation from the sultry tropical weather and human interference. However, before they have vanished completely it is critical to preserve them from their further decay with the help of art restorers.