From the dawn of civilization, our artists have drawn inspiration from changing seasons to paint, sculpt and write their dreams. Here is the story of Bijay Parida, a celebrated Pattachitra artist from Bhubaneswar and his visualisation depicting seasons of Odisha.

‘Once upon a time…an exiled Yaksha in a distant land

Pinning for his beloved…urges to carry a message to her’

A yaksha could change its form at will, take to the sky and fly where his fancy takes him, become invisible and indulge in a variety of supernatural capers. But the yaksha of Kalidasa’s Meghadootam had temporarily lost all these power. He had been banished for a year from Alkapuri, his divine abode beyond the sky touching peaks of the Himalayas by Kubera, the god of wealth.

Wandering southwards the yaksha had reached Ramagiri, south of Vindhyan-Satpura Hills. He was remembering of his young wife whom he had left behind in Alkapuri. They had been married just a few months. Standing on the top of Ramgiri, he looked up the overcast sky and envied the heavy, moisture-laden clouds that were slowly making their way northwards. He imagined they were going to his home in Alka, as they were moving in that direction. He wished he could join them, indeed race them, and fly home.

More than 1500 years later the vivid imagination of poet Kalidasa on the celebration of love with monsoon has found a fresh perspective through the fancy of Chitrakara Shri Bijaya Parida, an internationally acclaimed patachitra and pothi chitra artist from Bhubaneswar.

In 2015 when I visited Raghurajpur a few of the striking murals that fascinated me most was a large collage depicting 6 seasons (Greeshma, Varsha, Sharada, Hemanta, Sita, and Vasanta) and the divine Odia life that revolve around them in the land of Lord Jagannath.

The murals appeared stunning with minute perfection and detailing in a riot of colours. And what could have been the best central theme than illustrating Radha and Krishna’s epic love story that has been always eternal for billions of Hindus across the world? 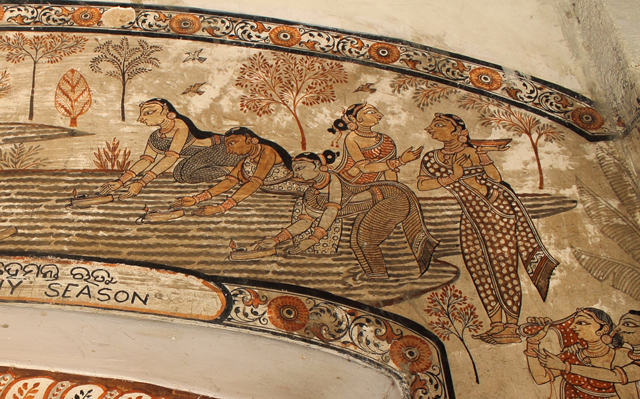 I did not know at that time about its creator and came to know recently when I met Bijaya Babu at his residence in Gangotri Nagar in Ekamra Kshetra, Bhubaneswar. Bijaya Babu is an artist par excellence. He has also been a great innovator of ideas both in patachitra and pothi chitra (palm leaf). In one of my recent posts, I had highlighted one of his unique creations, a talapatra pothi pankha (fan) exhibited at ODIART Purvasha Museum in Chilika.

Etching Krishna and his Childhood

In the early 2000s, INTACH had assigned Shri Anupam Saha to illustrate the walls of all the traditional houses at Raghurajpur in patachitra style. Bijaya Babu’s help was sought as Saha also had wanted social themes which he found difficult among the local artists to visualize. Most of the murals illustrated were conventional religious themes of Odisha. Bijaya Babu earlier had seen Bundi paintings in Rajasthan and had appreciated the depiction of rain and monsoon in the backdrop while projecting Krishna and his leela in the front.  That triggered his mind to conceptualize six seasons in patachitra style using Radha and Krishna as the central characters.

Once the idea got established Bijaya Babu started replicating it in tassar silk for his patrons.  I was fortunate to see and touch one. However, the colour scheme used here is a mix of black and faded brown –red distinctive from the conventional colours used in patachitra painting.  The painting had six equally divided units arranged in two rows, each unit depicting a season.

The first unit is the summer season. Gopis are seen making turmeric and sandal paste which would be applied to Radha and Krishna to relive them from the scorching heat.  At the lower frame sakhies are seen bathing Krishna and also merrymaking in the cool water of Yamuna. 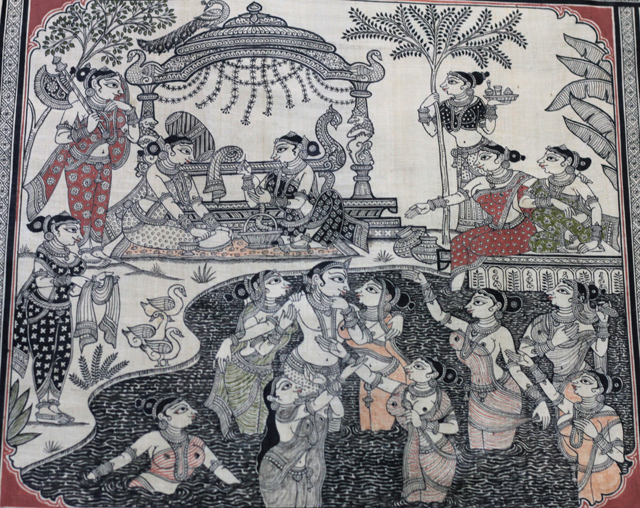 The next frame depicts monsoon, the season of restlessness both for humans, and trees and animals. But monsoon is also the season of romance when couples often find excuses to ease off under floating dark sky and against trembling trees and gushing water.  Radha and Krishna are delighted to be in rain experiencing all the ongoing events silently surrounding them. There is yet another couple too, equally indulged seeking divine union.

Sharada is the next season which has a clear sky. Sharad Purnima, the full moon night of Ashwina is celebrated as Kumar Purnima in Odisha. It is also the brightest full moon night of the year. While everyone seems to be in the celebration mood, Radha and Krishna are indulged in their private space under the moonlit sky. 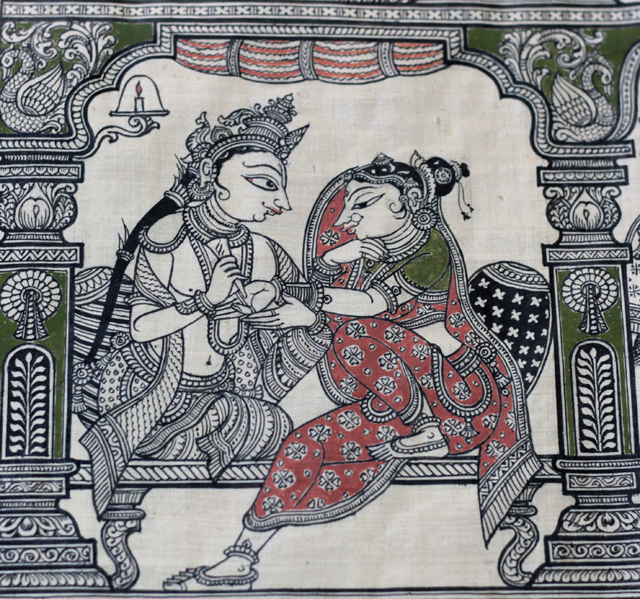 Hemanta follows Sharada, the season before winter. With pleasant weather and abundance of life, the coast of Odisha goes festive celebrating boita bandana as the reminder of past maritime heritage in the dawn of Kartik Purnima day. Krishna and Radha are depicted in a romantic mood, while Krishna offering a pan to his beloved. 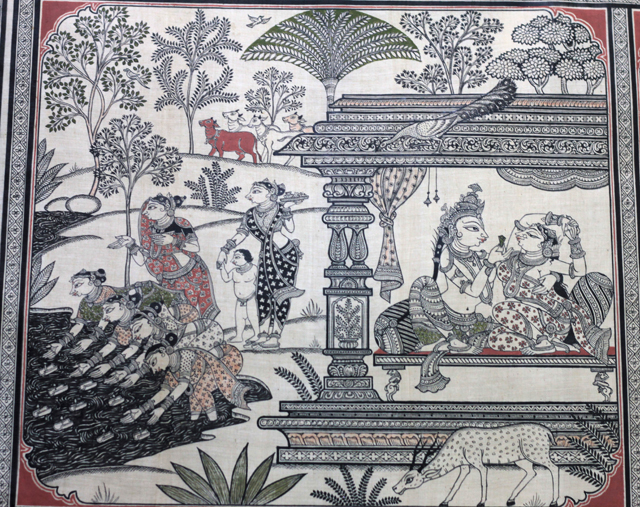 Winter follows the Hemanta season. With long nights and short days, while the folks are seen warming their bodies around a bonfire, Radha and Krishna are seen in their private space comforting each other in a cosy chamber against the intense cold outside. 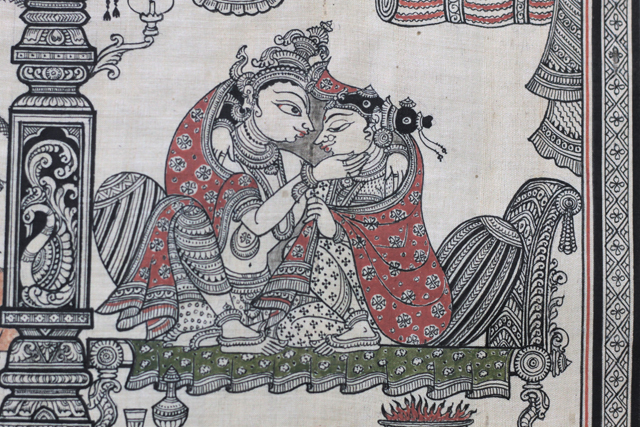 The last frame is the depiction of Vasanta, the king of all seasons. Here we see the celebration of Holi with colours and water. Krishna is seen playing Holi with his gopis and the target is his beloved Radha. 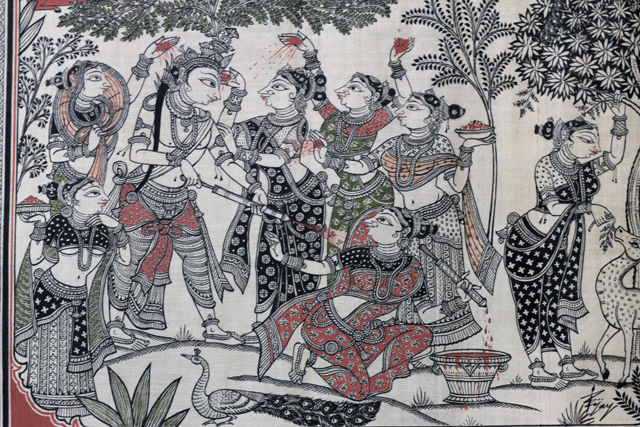 The conceptualization of the theme is epic reflecting the true spirit of India where the life is being celebrated with great pomp and festivity in a divine spirit for thousands of years. Change in seasons brings us new meanings to life and fresh purposes to live with celebration.

One thought on “Celebrating Seasons through Pattachitra”