They call themselves children of Kui Dina (Kui Country) and for outsiders, it is Kandhamal (named after Kondh Tribe). Thousands of square miles of rolling hills and dense jungle, Kandhamal is a nature lover’s paradise. Her forest is rich in majestic Sal trees followed by Piasal, Kendu, Gambhari, Kusum, Harida, Bahada, Amla, Mango, Tamarind, Mahua, and many more.

The forests of Kandhamal can be classified as dry and wet deciduous forests depending upon the season you visit. On its deep valley mountain floors, there are hundreds of villages of Kondh Tribe scattered around the deep jungles. The 19th-century British romanticists referred to this area as ‘Kondhistan’. 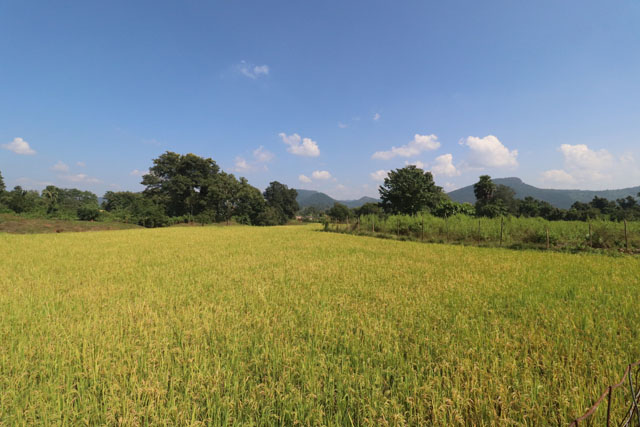 The Kondhs speak in a Dravidian language called ‘Kui’ which is spoken in an extreme nasal form. 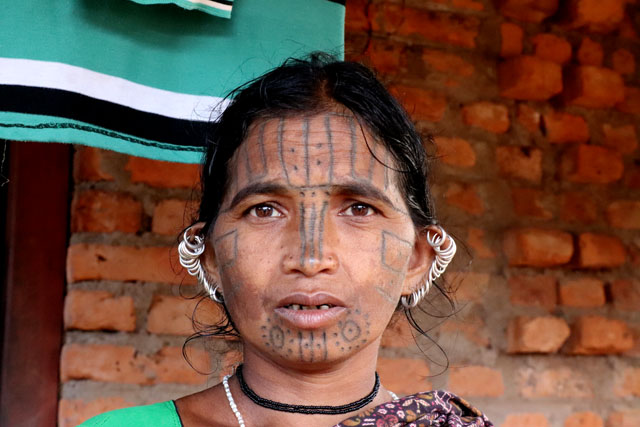 The utilisation of forest wood is an integral part of their heritage. Their houses are made of wooden posts plastered with mud. Their settlements are fenced with wooden posts erected in a line, some time for hundreds of meters.

BARBARA FOREST – A BLEND OF NATURE, INDIGENOUS CULTURE AND ARCHAEOLOGY 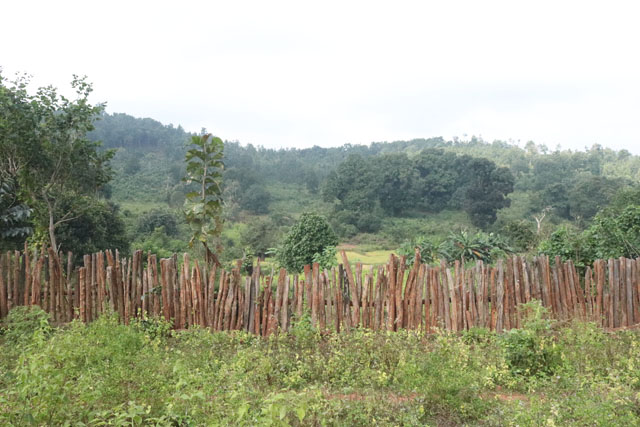 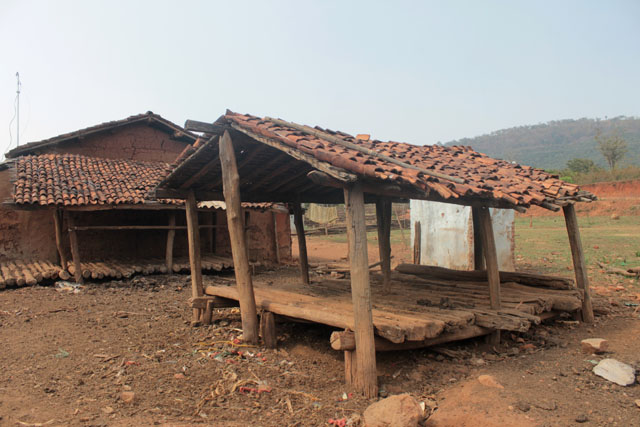 When you get into their huts you will be surprised to discover most of their material objects, such as plough, yoke, spade, pounding posts, and bells for cows and goats, are made of wood. 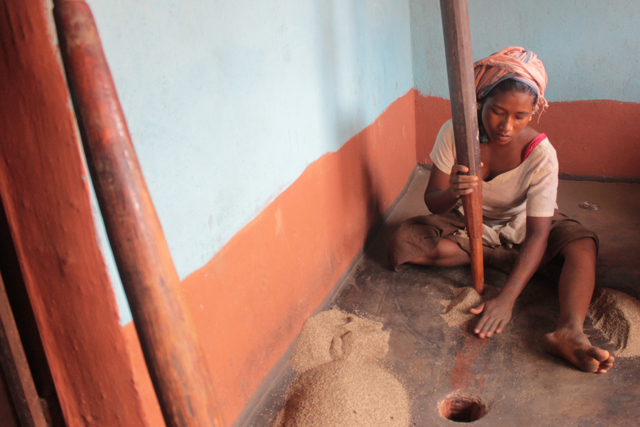 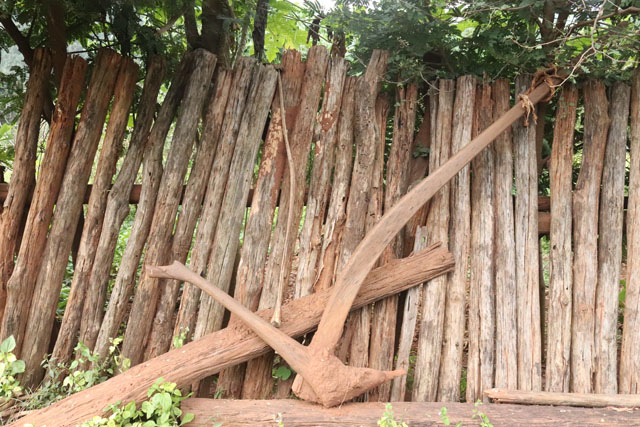 However, what strikes you most is their Meriah Sacrifice wooden posts. The Kondhs in the interior hills practises Meriah sacrifice (earlier they would sacrifice a human, now a buffalo).

A JOURNEY THROUGH KONDH TERRITORY, A TRIBE THAT ONCE SACRIFICED HUMANS 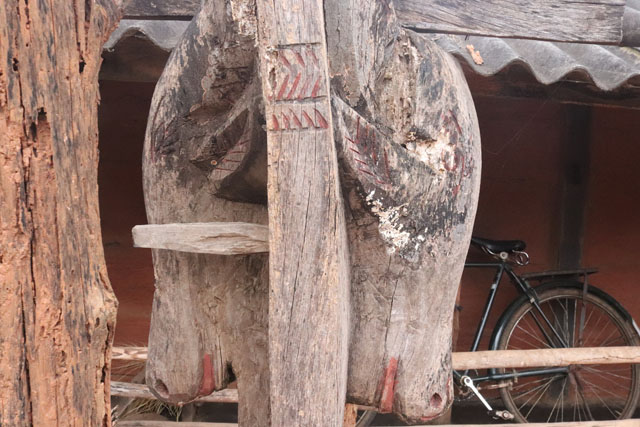 The term Meriah is a corrupt form of the Kondh term ‘Mervi’, which refers to the Kondh God Mervi Pennu, a brother of the Earth Goddess Tari Pennu. The Kondhs believe that buffalo sacrifice would give them good crops and protection against all diseases and natural disaster. The buffalo is purchased and brought to the middle of the village. After worshipping earth goddess and the victim, the buffalo is tied to a wooden pole. 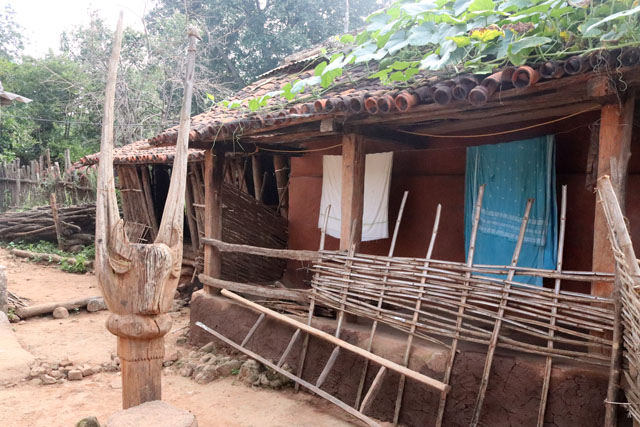 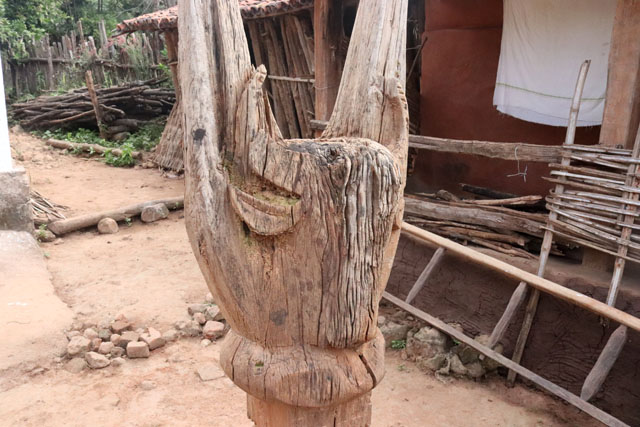 The victim is decorated with flowers and vermillion. Then the Kondhs bring their knives and tangi (axe) and after getting intoxicated they sing and dance around the victim for a few hours. Then at a particular moment, the priest (Jani) signals and all of them (numbering between 30 and 50) hit the buffalo at the same time. The blood stuck to the instrument is considered auspicious and the instrument would prove ultimately to be very lucky, efficient and productive that year.

Throughout this event, the Kondhs assign the buffalo the supernatural soul carrier. Inside many Kondh traditional houses you will find buffalo horned wooden posts showing nice carved designs (clan marks), which are worshipped as symbols of the household ancestors. 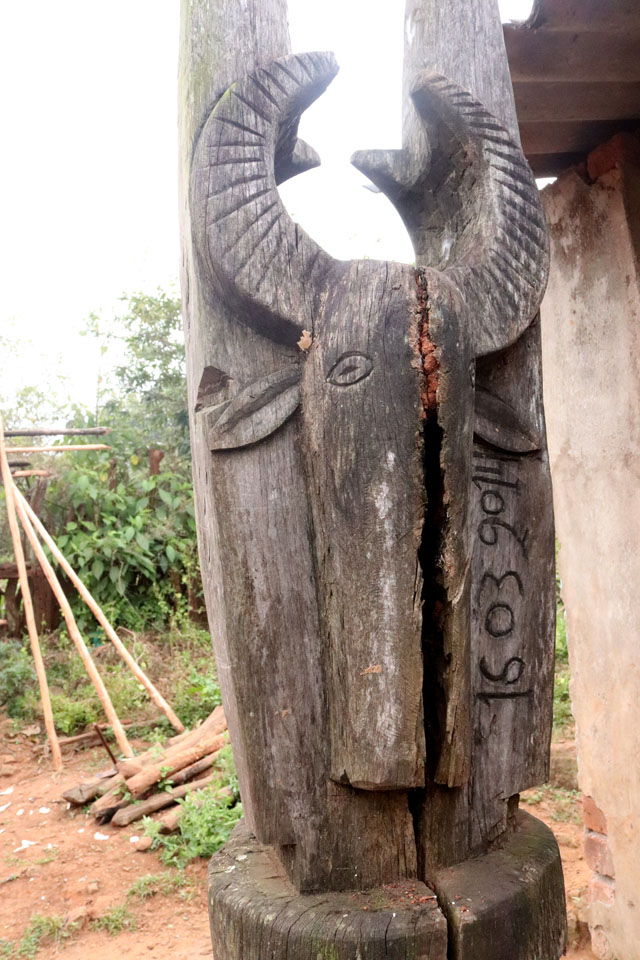 Interestingly, the Hindu God of Death, Yama is also associated with water buffalo acting as a mythic vehicle (vahana) to the ether world. Archaeological interpretations also suggest that sacrifices of buffalos were seemingly performed by the people of the Indus Valley Civilisation for some unknown religious rituals. Today, not only Kandhamal but in many parts of Eastern India, buffalo acts as the chief sacrificial animal in a class of structurally related death and ancestor worship ceremonies.

Baliguda is at the heart of Kandhamal strategically located on the highway that connects Bhubaneswar with Rayagada, Kandhamal and Kalahandi. Most of the Kondh villages are around Baliguda, which has also decent staying options. The village of Podpada is before Baliguda (20 km) on the highway from Bhubaneswar. It takes about 7 hours in a private vehicle to reach Baliguda. There are also comfortable night buses. The other option for stay is at Daringibadi, a popular tourist place among Indians located at a distance of 50 km from Baliguda.

The Baliguda region of Kandhamal, which also forms the core of Kui Dina, was under the rule of the Gangas from the 10th century and under the Bhanjas of Ghumsar from 18th century until the time it was annexed by the British in the mid 19th century. During the reign of the Bhanjas (18th-19th centuries), Kandhamal also saw architectural activities, similar to the coastal plains of Odisha. 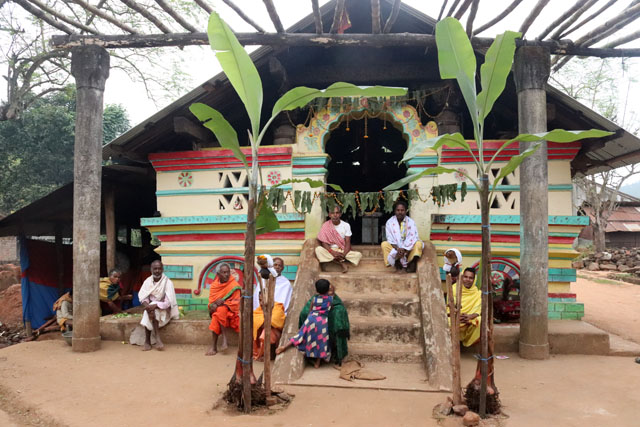 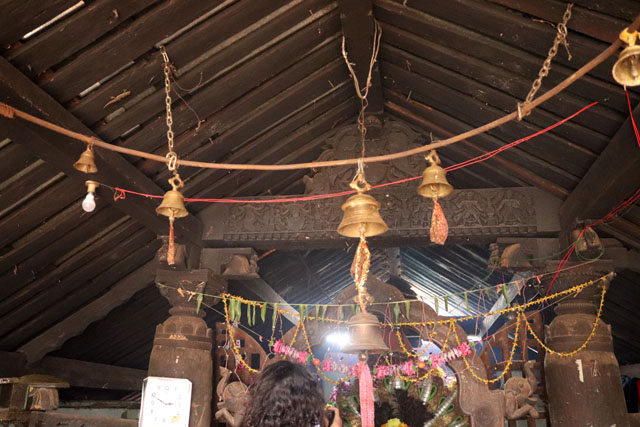 One major aspect of the architectural tradition is the extensive use of wood carvings in-ceiling and doorjambs, similar to ones found at Biranchi Narayan Temple at Buguda.

The Nrusingha Temple at Podapoda Village on the highway that connects Phulbani with Baliguda is the only remains of rich wooden heritage. Though mostly gone, the temple has been known for its wooden gems featuring Tantric rituals and geometrical motifs on its lintel. Unfortunately, its roof is replaced with tin sheets now. Depiction of peacocks forming a circle at the central part of the lintel is a major draw. Besides, there are representations of garudas and monkeys noticed in the interior of the structure. 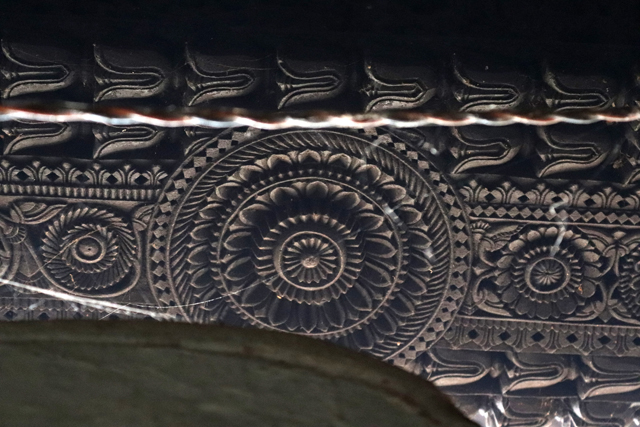 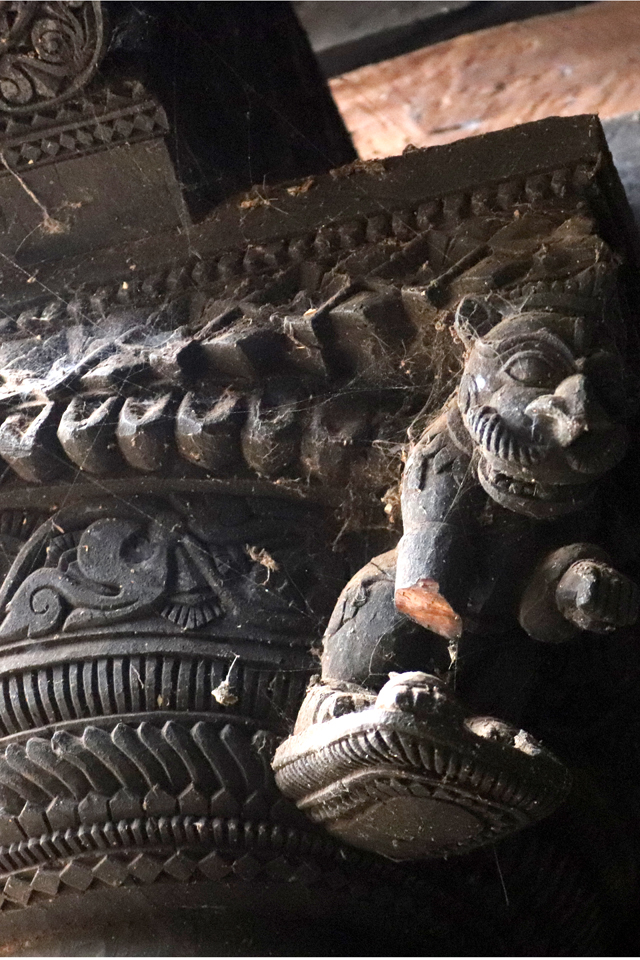 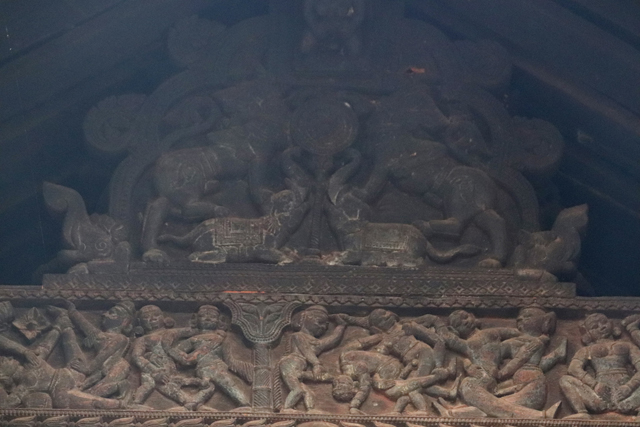 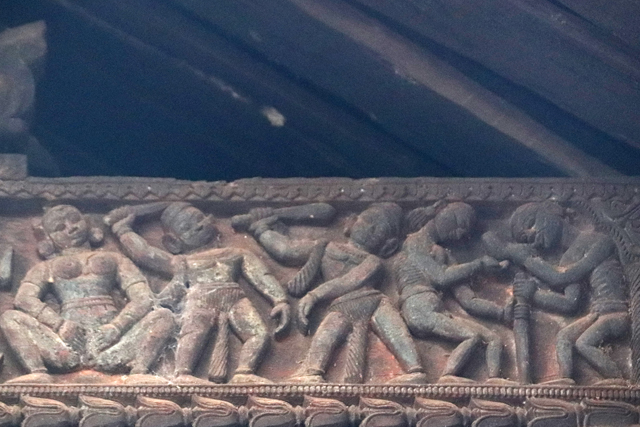 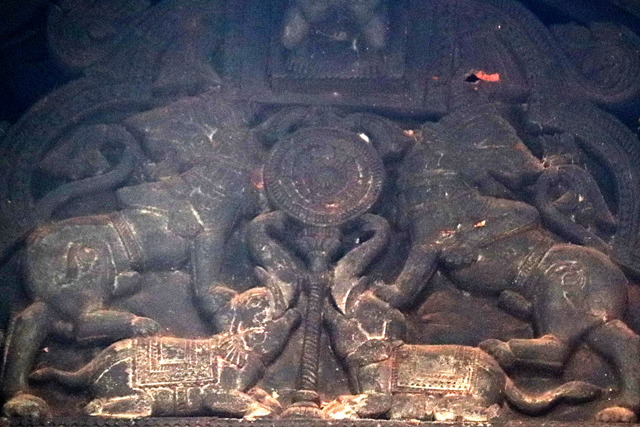 The wooden heritage of Kandhamal is truly unique, but sadly many of its priceless treasures are in a sorry state of preservation due to lack of patronage and loss of interest among Kondhs. To save them we need a strategic plan inviting heritage conservationists, historians, travel professionals and of course involving local stakeholders, such the community members of Kondh Tribe and non-Tribal communities.

2 thoughts on “Kandhamal – Heritage in Wood”