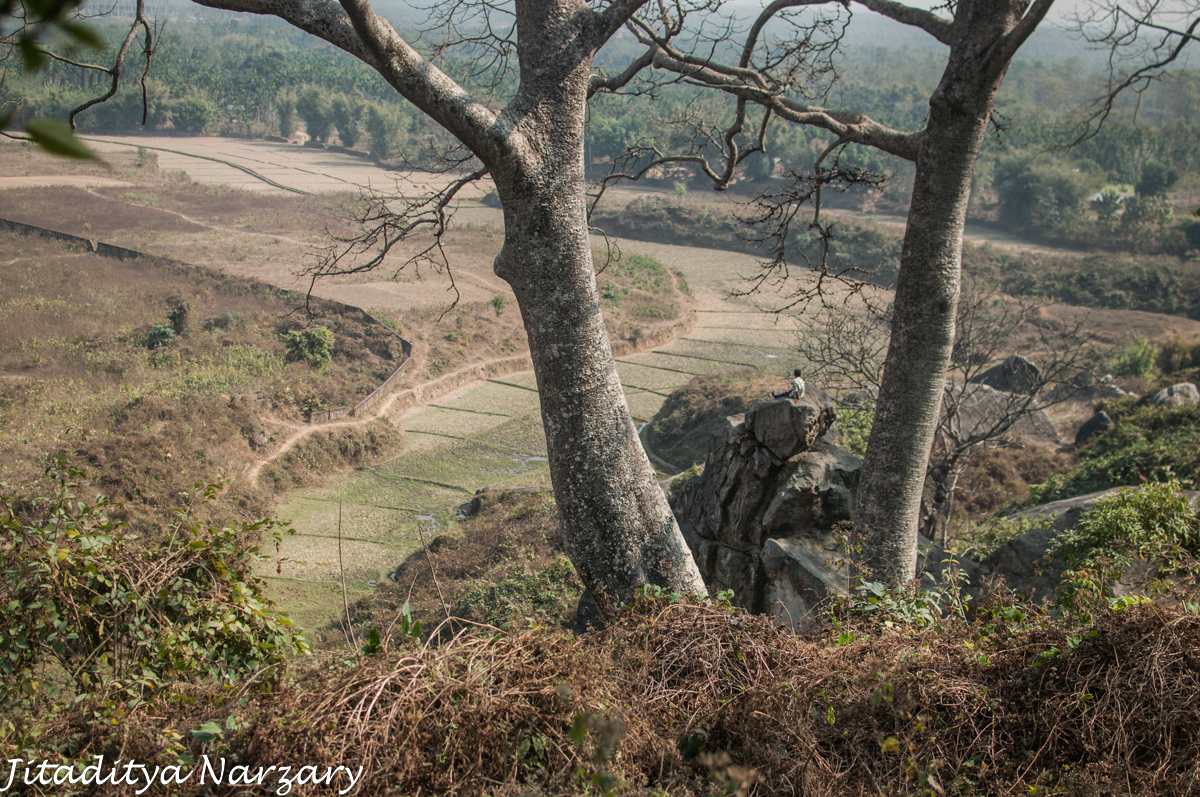 The very mention of Sri Surya Pahar generally evokes a sense of doubt and confusion. Most people are unaware of it and even those who know the name find it hard to locate it on a map. The fact that it is one of the oldest and largest archaeological sites providing a vital clue to Assam’s undocumented ancient past matters little when it is not even taught about in local schools. The location also doesn’t help. Goalpara is not a district that generally features on the tourist map of Assam, inspite of it being quiet close to Guwahati and not that hard to reach.

I don’t exactly remember the moment but I first heard about it during my school days although it took several years to make the first visit. Over the subsequent years, more trips to the place followed and with every trip, my fascination for the site deepened, along with my frustration at its obscurity.  I have never seen another tourist out here. The only visitors are local pilgrims, most of whom mistake the Buddhist stupas to be Shivlings.

Like most other archaeological sites in Assam, Sri Surya Pahar has a very unclear history. It is located atop a group of small hillocks not very far from the Brahmaputra. Considering the convenient location, it is not hard to imagine a prosperous port-city in the ancient times around these hills. What we know for sure is that this site contains remains of Hindu, Buddhist, as well as Jain shrines, thus pointing towards an era that has not yet been properly studied or investigated. Buddhist sites are rare in Assam and Jain sites are practically unheard of. So, this makes Sri Surya Pahar a very unique proposition.

ASI has been conducting excavations intermittently over the last few decades and while a lot has been dug out so far, a lot more is believed to be still under the ground. Looking at the diversity and expanse of the site, it can be guessed that constructions must have taken place over multiple centuries, and represent different eras. In the absence of any solid historical document from those times, one has to take the help of ancient scriptures and some apparent references to the site can be found in a few 9th and 10th century religious texts. Also, these austere votive stupas point to a period of Hinayana prominence. In comparison, Mahayana sects were known to build more elaborate structures but they rose to prominence much later. This inference has led historians to believe that the Buddhist remains here could be as old as 2000 years, thus making them older than the oldest known historical reference to Assam (Gupta Era, 4th-5th Century). While none of these can be verified with complete certainty, it can be concluded that this site had been developed over a significant period of time in the first millennium.

Sri Surya is not just one monument but a cluster of scattered ruins. According to some local myths, the site had 99999 shivlings in its original form. It sounds somewhat similar to that of Unakoti in Tripura which is believed to have one less than 10 million statues. In reality though, some of these are actually stupas while rest of them are indeed shivlings. The largest stupas are located on the western side of the site. Stairs have been built by the authorities and it takes a bit of climbing to reach the more important portions. One must have the willingness to climb all these stairs under blazing sun and spend at least a three hours to fully explore the site. Apart from the stupas, there are also a few unexplained ruins like the remains of a square shaped basement of some structure, which is believed to be a Vihara. There is another square shaped remain on the south-eastern side of the hills which is even harder to explain or predict. 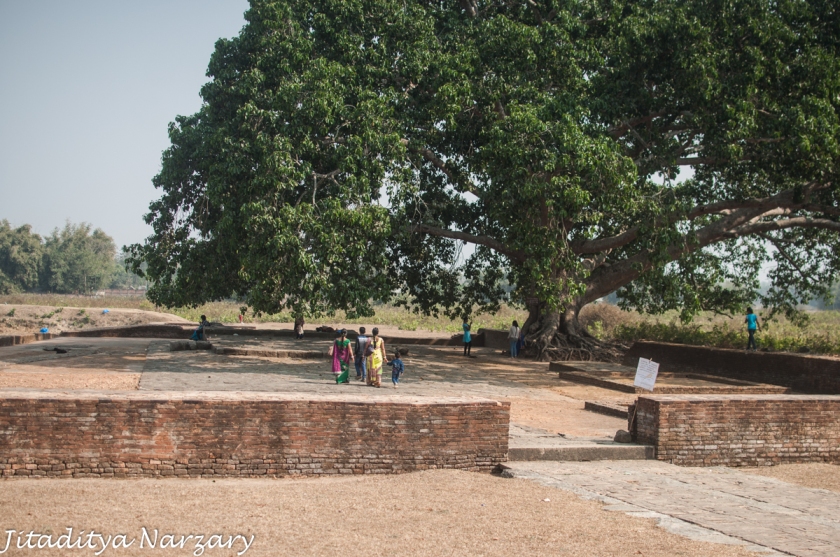 As far as the Hindu ruins are concerned, they are easily identifiable. There is a devi sculpture with twelve hands on a large rock, which is the primary attraction for the devotees. Various statues and sculptures related to Shiva and Ganesha are all over the site. However, many visiting hermits tend to build temporary structures out there, blocking the view.  This primarily happens during the month of “Magh” (January-February), when a local fair is organized. I tried hard to trace the origin of this fair and as far as I could understand, it started some time during the early 20th century when an ascetic settled here and started the fair as a way of attracting pilgrims.

So, this year we visited it in February when the colourful local fair was in full swing and in complete contrast with the rest of the ruins. Nowadays it attracts a large number of local visitors and it is a rare form of entertainment for many. This also offers an opportunity for many new age, commercialized holy men to set up their “shops” here for a few days. Some of them could be seen taking residence in some of the caves and consulting the locals on various matters.

The most puzzling though are the Jain remains. Assam has never really had a serious Jain connection in the past and the only known Jain communities here are the mercantile communities that arrived from Rajasthan in the 19th and 20th centuries. The Jain parts of Sri Surya are located on the South Eastern side of the site and it takes a bit of strenuous climbing through a flight of reasonably steep stairs to reach that part. The artefacts are not very elaborate in these parts. There are a few caves that were Jain meditation spots according to ASI signage. However, locals have a habit of planting flags and applying vermilion without much regard for its history. 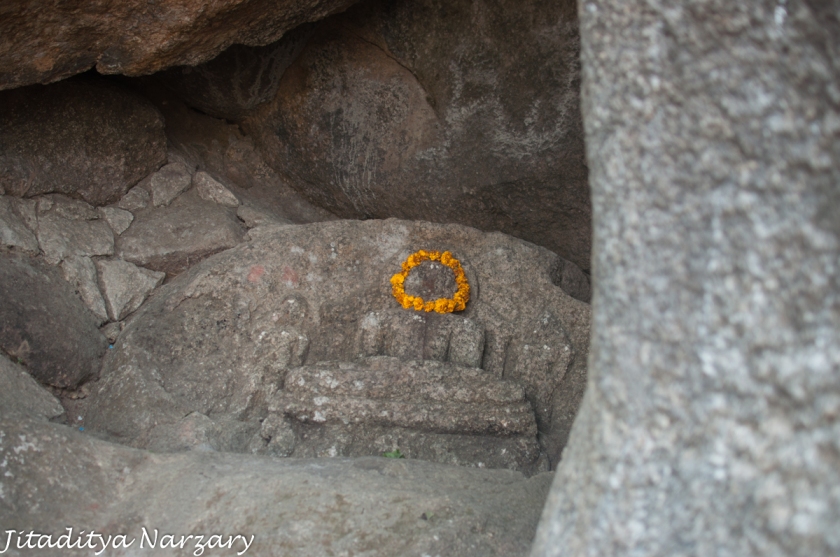 Also, as the name of the place suggests, sun worship should have been a primary aspect of Sri Surya Pahar. None of the major structures and artefacts point to that. It is in fact, hard to say how this place came to be called so. However, one of the excavations resulted in an artefact that to some extent looks like the sun. A small temple has been built to keep it protected but we were told that the original artefact has now been moved inside the museum situated nearby to protect it from damages and a replica is placed inside a newly built temple. But that has not deterred the visitors from gleefully offering prayers in front of the replica.

Sri Surya remains a mystery, a tantalizing one for the lovers of history and archaeology. Technically it is sort of a missing link that remains hidden in plain sight. It deserves better restoration as well as research because that can clear a lot of doubts and provide a clearer picture about life and times in ancient Assam.

How to Reach Sri Surya Pahar

It is 124 kms westwards from Guwahati. The nearest big towns are Goalpara and Dudhnoi. As the spot has not been developed as a tourist destination, you are unlikely to find any accommodation or public transport going directly to the point although buses do ply on that route. It is better to have a private vehicle and just follow the map.

It can be visited anytime but better to go in the winter as the rocky hillocks heat up very easily on a clear day.

Where to stay near Sri Surya

Goalpara district does not have a very developed tourism infrastructure. There are a few small hotels in the nearby Goalpara town but a better idea will be to make a day trip from Guwahati and return by evening.

He can be reached here